Harrison, Ohio native, Justin Owen picked up his first win at Lawrenceburg on the last race of the year a few years back.  Although he’s had some strong runs, he hasn’t been able to break into the win column again until this past Saturday night where he showed that when he has things together, he is tough to beat.  JJ Hughes jumped to the lead from the opening lap until Joss Moffatt passed him on lap 3.  Moffatt showed the way until Owen secured the top spot in lapped traffic on lap 12.  Owen pulled away and won convincingly over JJ Hughes, Joss Moffatt, Michael Fischesser, and Tripp Gerrald.  Heat race winners were Hughes and Moffatt.  The Kelsey Chevrolet Sprint Cars return to The Lawrenceburg Speedway on Saturday June 18th along with The BOSS Sprint Cars.

Hamilton Back to Winning Ways!

Matt Hamilton has struggled so far in 2022 battling mechanical issues.  On this night, Hamilton avoided the bugs and won his first feature of the year.  He did however have to work for it.  Hamilton had to fight with defending track champion David Spille on his way to picking up the win.  Spille didn’t go down without a fight but had to settle for second with Anthony Chaney third, followed by Matthew Morris and Scotty Kincaid.  Heat race winners were Morris and Spille.  The KOI Auto Parts Modifieds return to the track on Saturday June 18th.

Cordell Moore took the lead from Doug Yust on lap 3 and led the final 10 laps on his way to another feature win in the Besslers U Pull N Save Hornet class.  Alex West finished second followed by Jesse Ramirez, Landen Ramirez, and Gary Snyder.  Heat race winners were Snyder and Ramirez.  The hornets return to the track on Saturday June 18th.

Joel Andrews crashed out of the second heat race of the night and almost loaded his car up and went home.  He had bent the right front tie rod and several other parts off the right front.  Instead of going home, he decided to try and fix it.  He repaired what he could but still had a bent tie rod and the suspension was not in proper working order.  He brought his car out for the feature and had to start at the tail but methodically worked his way through the field.  Danny Eichler had taken the lead on lap 4 and appeared to be in control even able to hold off Andrews for a couple laps.   They raced side by side until Andrews was able to grab the lead on lap 9 when Eichler got held up by a lapped car.  Eichler continued to keep pace with Andrews but in the end, Andrews was the first back to the checkered flag.  Eichler finished second with Corebin McRoberts, John Heaston, and Don Grace rounding out the top 5.  Heat race winners were Danny Eichler, and Conner Mertens.  The Impact Sports Purestocks return to the track on Saturday June 18th. 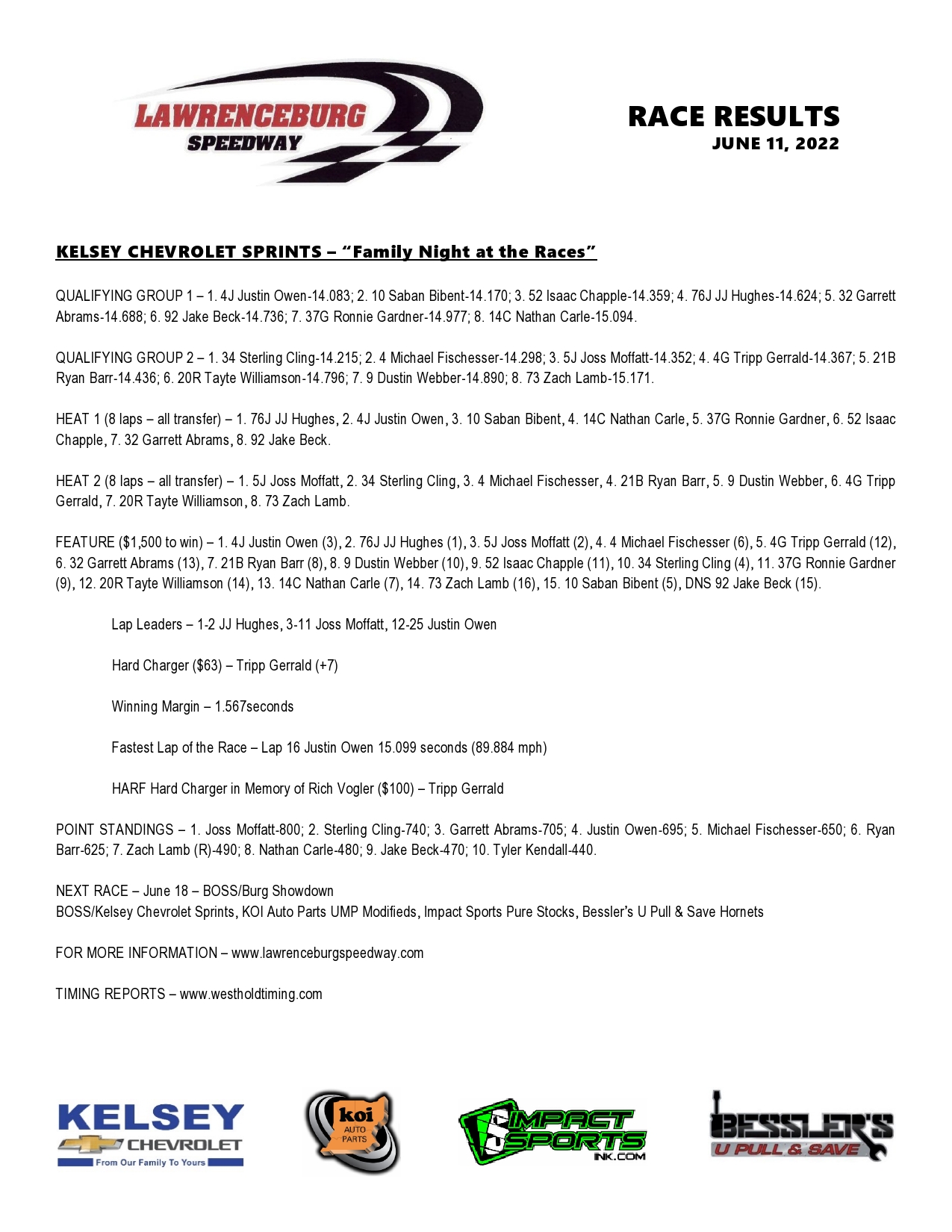 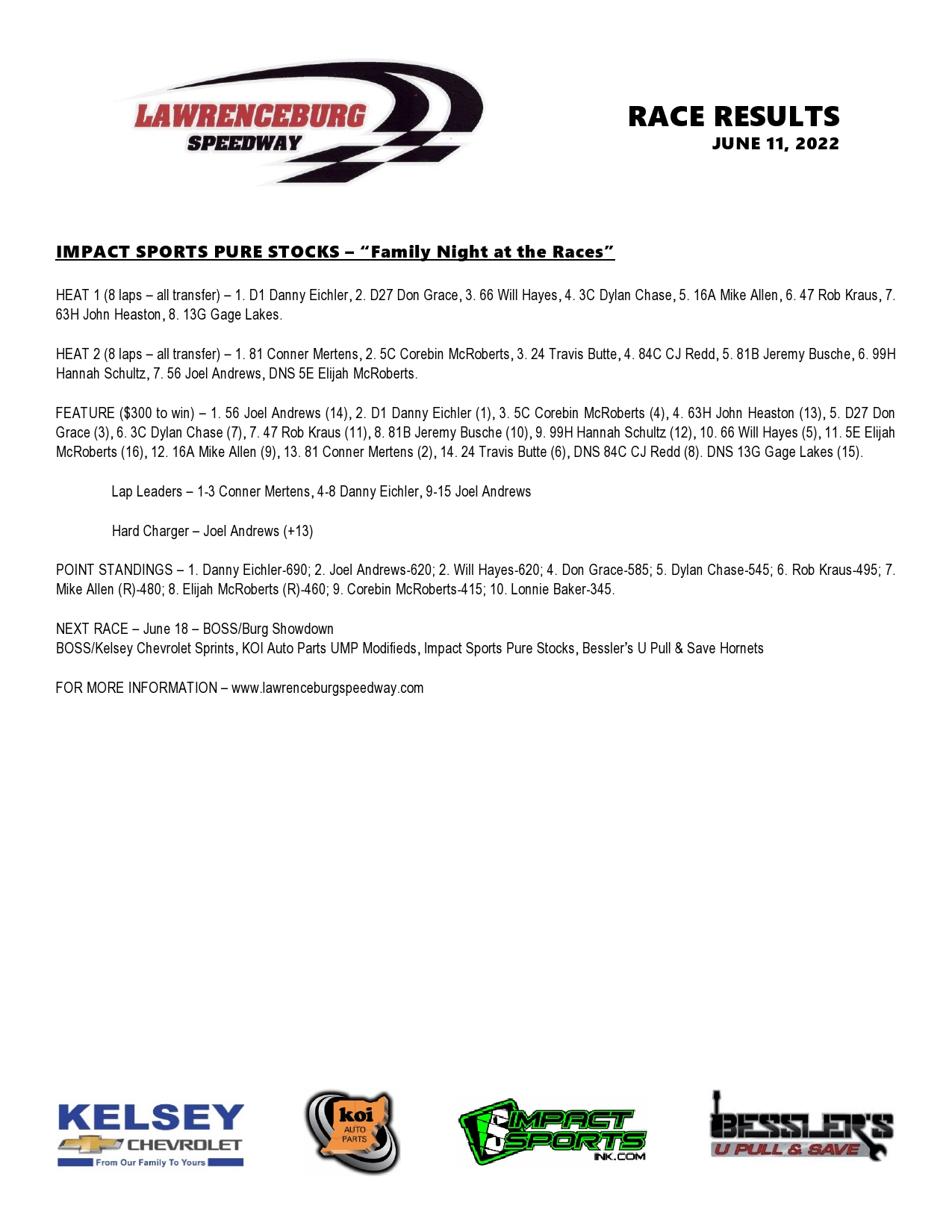 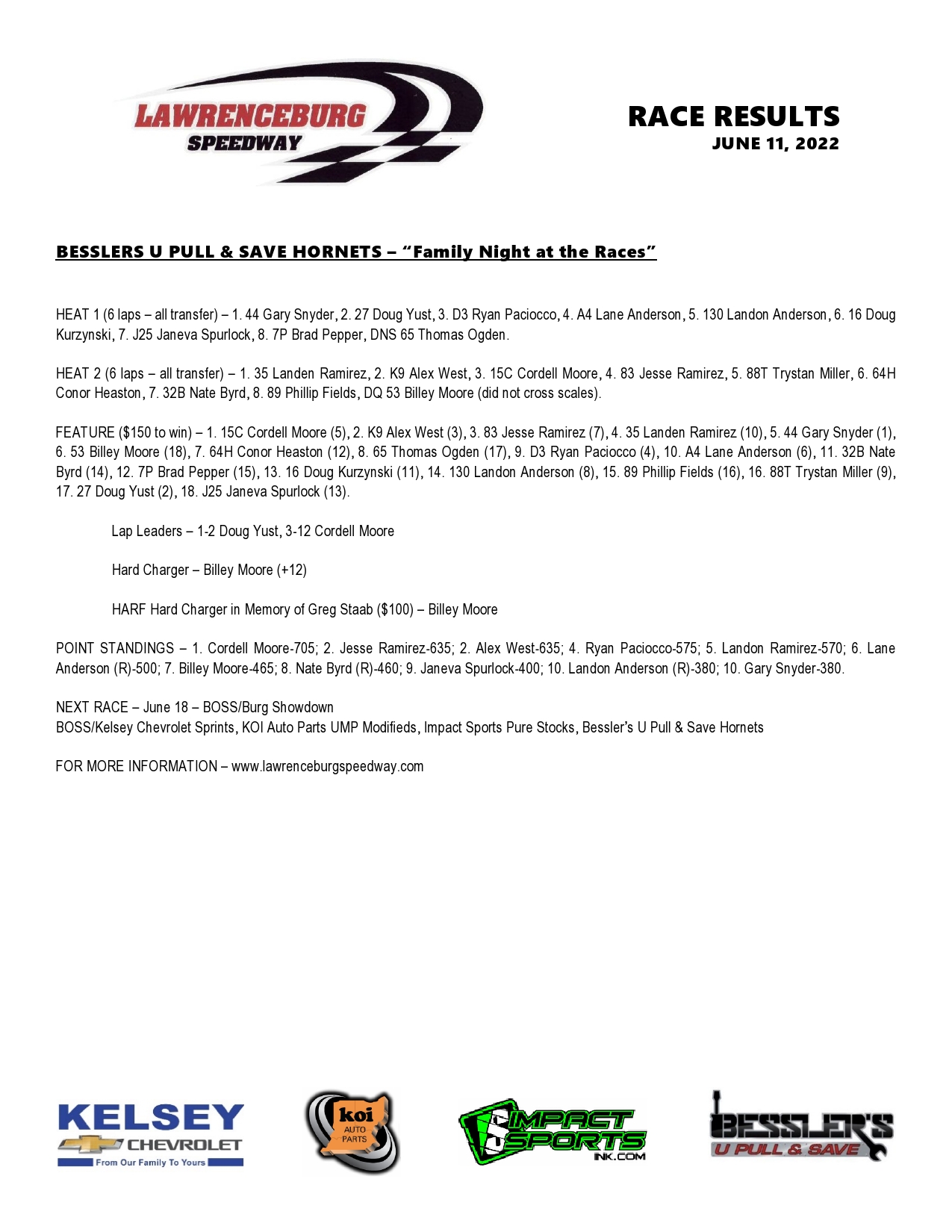