Boespflug Wins in Return to Lawrenceburg!

Lebanon, Indiana’s Chad Boespflug returned to Lawrenceburg for the first time in 3 years and picked up the feature win in impressive fashion.  Last week’s feature winner, Tyler Kendall jumped out to the early lead before giving up that lead to Boespflug on lap 7.  Boesfplug would lead the remaining 19 laps on his way to the feature win over Tyler Joss Moffatt, Garett Abrams, and Cole Bodine.  Heat race winners were Sterling Cling and Tyler Kendall.  The Kelsey Chevrolet Sprint Cars return to Lawrenceburg next Saturday night for the King of the Midwest Sprint Cars.

Defending track champ David Spille would pick up the feature win after assuming the lead under caution when then race leader, Kyle Schornick pulled off the track after overheating issues.   Matt Hamilton jumped out to the lead early  and for the first 12 laps, Hamilton and Kyle Schornick were fairly even for the lead.  On lap 13, Hamilton suffered a mechanical failure and retired from the event.  While Hamilton’s car broke, Schornick and other contenders, stacked up behind him with Schornick even running into Hamilton’s tail when he broke.  Unfortunately for Schornick, the contact may have hurt his own car, causing it to overheat.  Schornick would pull off the track in order to preserve his car from doing further damage.  That would turn the lead over to David Spille who would lead the remaining 4 laps on his way to picking up the feature win.  The rest of the top 5 was Jeffrey Jessup, Gage Clark, Jay Greene and Josh Walker.  Matt Hamilton and Kyle Schornick won the heat races.  The KOI Auto Parts UMP Modifieds return to the track next Saturday, April 30th.

Andrews Back in Victory Lane!

Joel Andrews went through a period where he was the dominant car/driver in the Impaact Sports Purestocks.  For the last year or so, Andrews had struggled in comparison.  He had run well, but certainly not the dominant driver and the wins were not piling up as they had been in the past.   Don Grace took the lead on the opening lap and led for 2 laps before Joel Andrews would assume the lead.  Andrews would have to hold off the legendary Danny Eichler, but in the end, he was able to do just that.  EIchler would finish second followed by Don Grace, Will Hayes, and Lonnie Baker.  Heat race winners were Will Hayes and Danny Eichler.  The Purestocks return to the track next Saturday night!

Defending Bessler’s U Pull N Save Hornet track champion, Landon Ramirez dominated the hornet feature, leading the final 11 laps on his way to picking up his second career win.  Cordell Moore had to start 10th by virtue of winning last week’s feature.   Moore quickly made his way to the runner up spot but that was as far as he could get.  Ramirez was able to hold him off for the win.  Moore was second followed by Alex West, Ryan Paciocco, and Jesse Ramirez.  Heat race winners were Jesse Ramirez, Cordell Moore and Landon Ramirez.  The Besslers U Pull N Save Hornets return to the track next Saturday night! 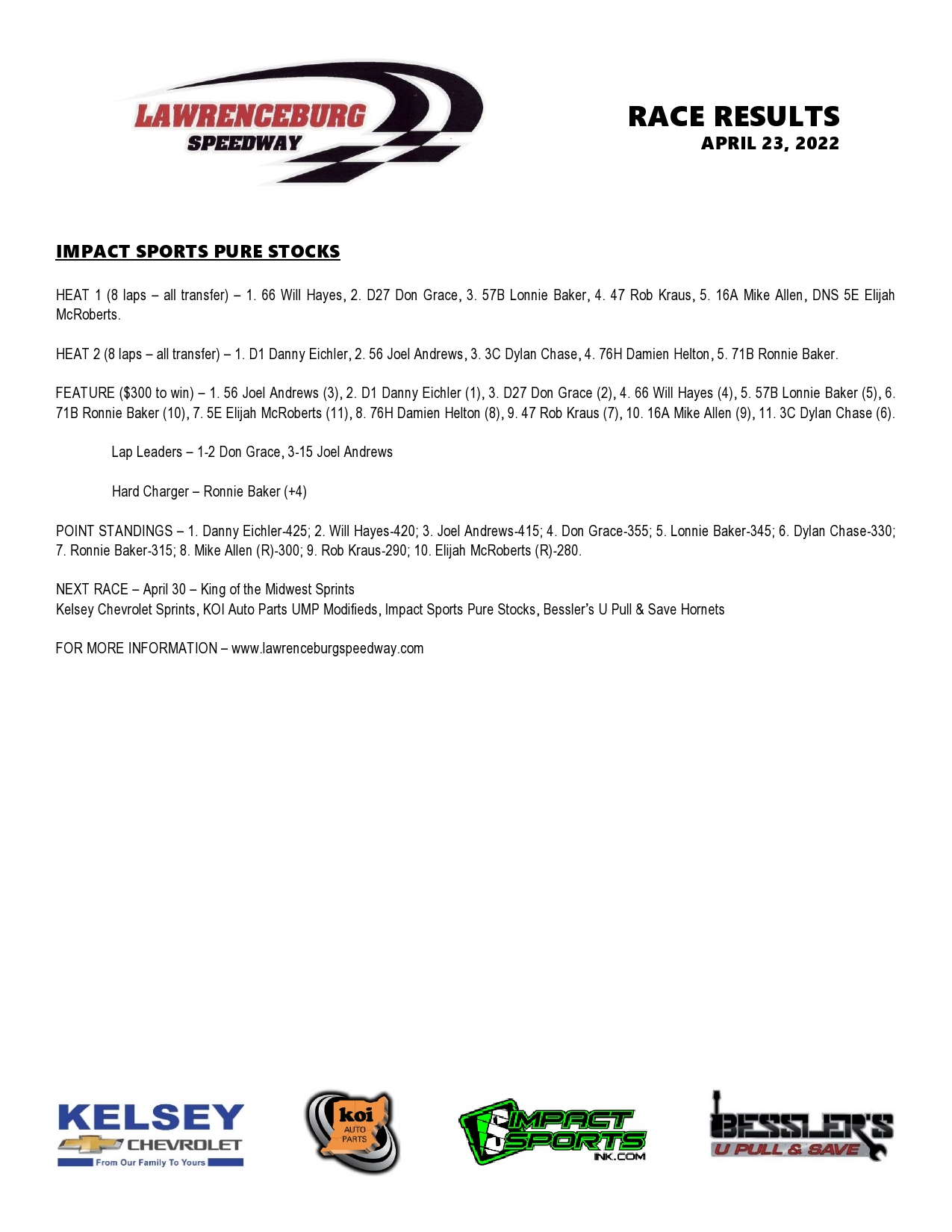 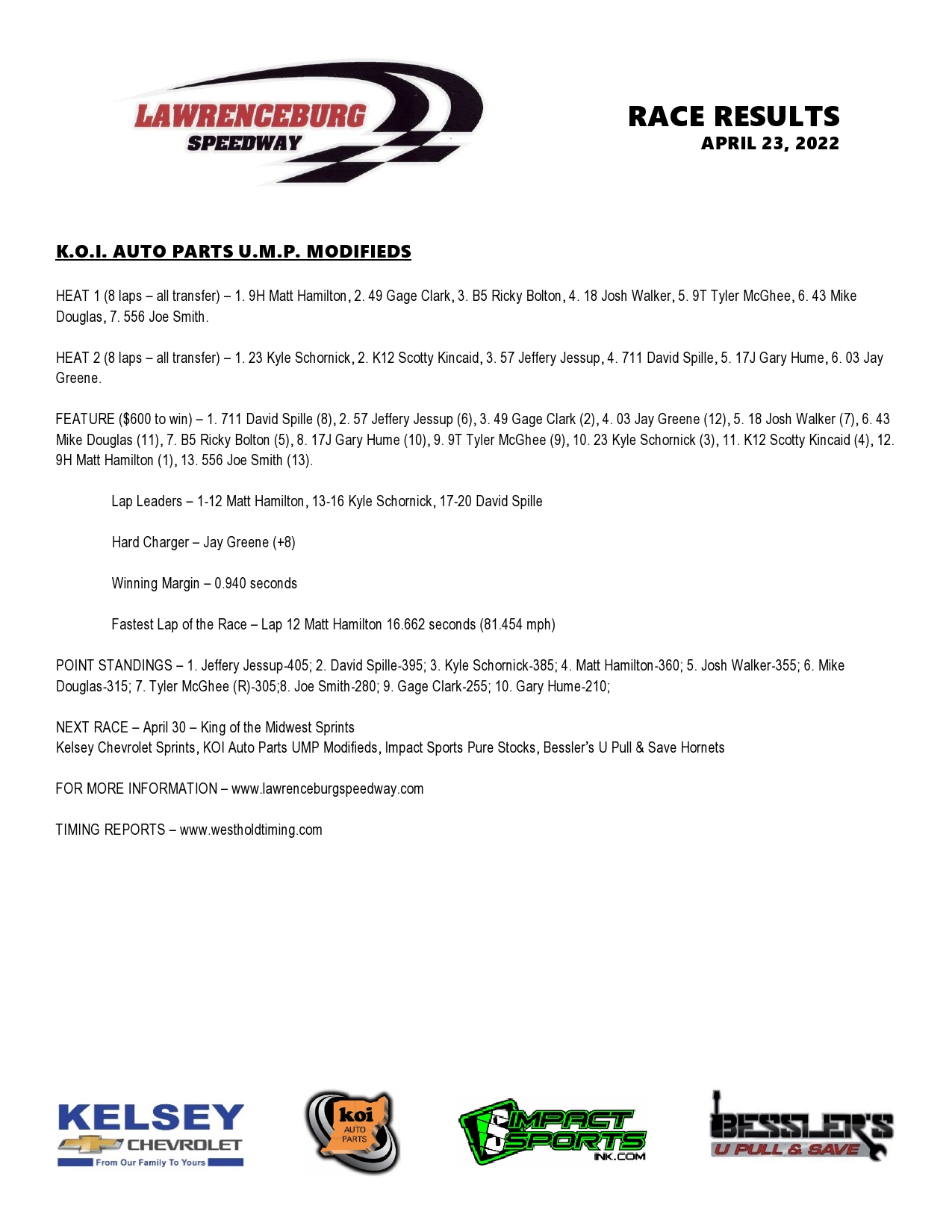 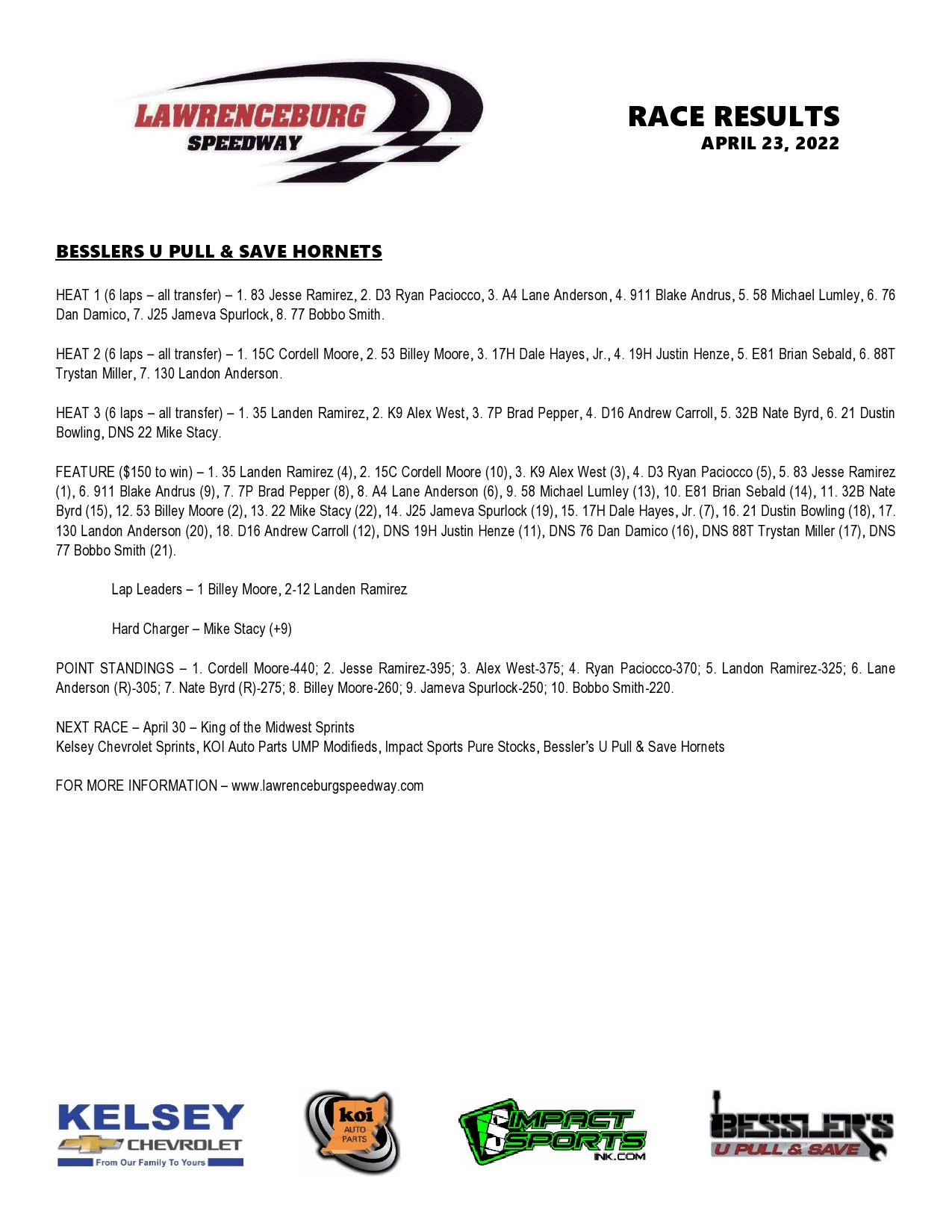