Moss, Tennessee’s Ricky Arms would not have been considered a favorite entering the 10th running of The Merrill Downey Memorial.  Arms was one of 78 UMP Modifieds who entered the night in pursuit of picking of the winners check of $10,444.44.  The 44 lap feature began with two of the favorites Tyler Nicely and Nick Hoffman battling for the lead.  Both drivers had very good race cars and battled side by side for the lead for several laps.  Hoffman secured the lead and Nicely entered turn three to the inside of Hoffman.  The two made contact and both cars spun out and came to stop in turns 3 and 4.  Both Nicely and Hoffman were able to continue but both cars had to restart from the back.  This turned the lead over to Ricky Arms on the restart.  Arms jumped out to a commanding lead on the restart building over a 5 second lead.  At the back of the field, both Nicely and Hoffman methodically worked their way through the field toward the top 5.  Without a caution flag, it would be almost impossible for either Nicely or Hoffman to contend for the win.  The race would remain under green until the checkered flag.  Arms was never seriously challenged.  Bryan Barber finished second followed by Tyler Nicely, Nick Hoffman, and KC Burdette.  Arms’ total winnings with lap leader money was $11, 032.  Heat race winners were Nicely, Seth Daniels, Arms, Dylan Woodling, Hoffman, and Kyle Schornick.  B main winners were Josh Harris, Cole Parker, and Cole Parker.  Fast time qualifiers for their respective groups were Kyle Steffens, Trent Young, and Nick Hoffman.  The KOI UMP Modifieds return to the track on Saturday July 10th.

Robby Hensley loves the Lawrenceburg Speedway.  Even though Lawrenceburg Speedway doesn’t host late models often, when they do, they always put on a good show.  Usually, the driver to beat is Robby Hensley.  Hensley quickly made his way to the front and held off a hard charging Austyn Mills to take the checkered flag.  Following Hensley across the line was Trevor Landrum who got around Mills after Mills last ditch effort to pass Hensley failed, followed by Mills, Jerry Bowersock and Tristan Chamberlain.  Heat race winners were Duane Chamberlain, David Webb, and Robby Hensley.

Lawrenceburg Speedway Fire-Resucue as well as Family & Friends of Merrill Downey would like to thank the following contributors to this event: 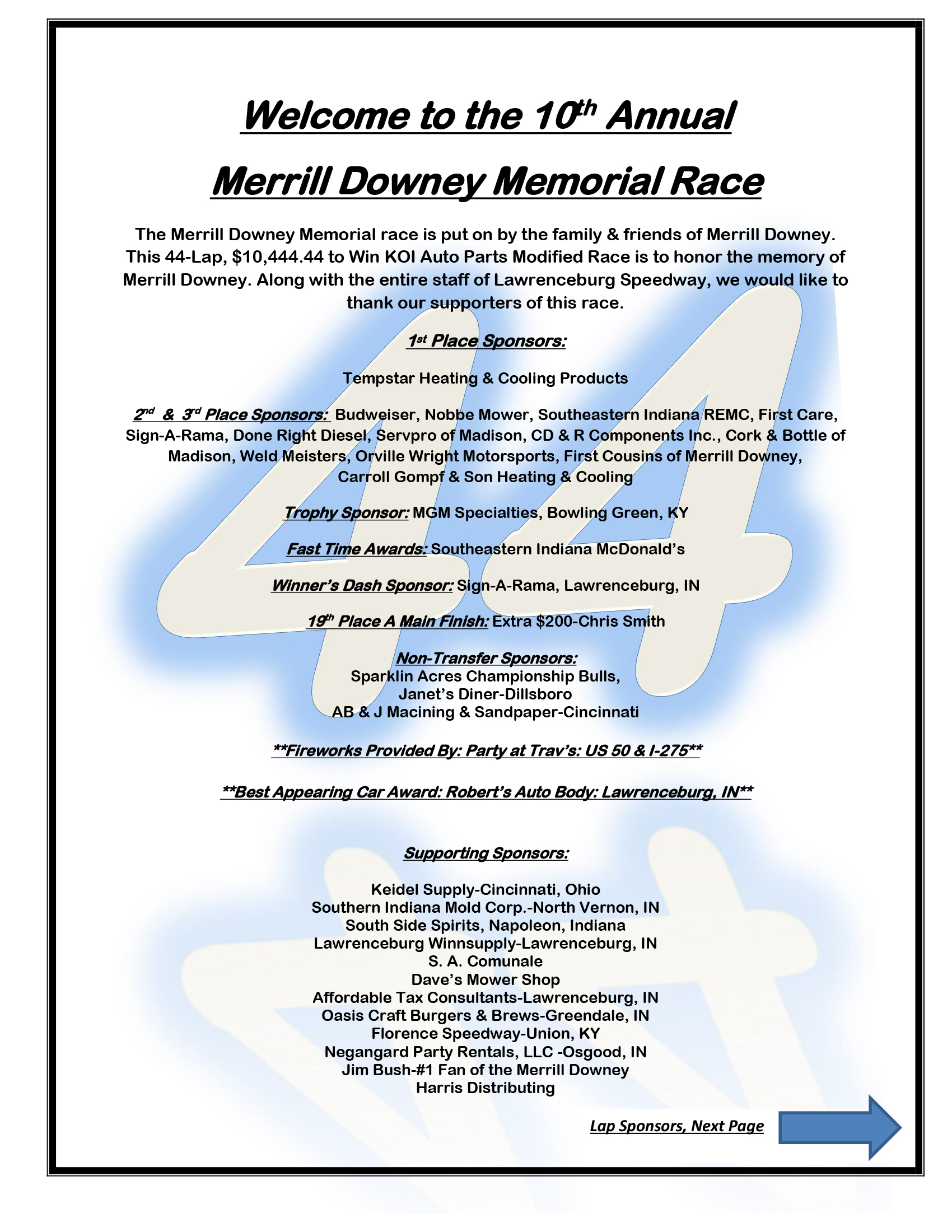 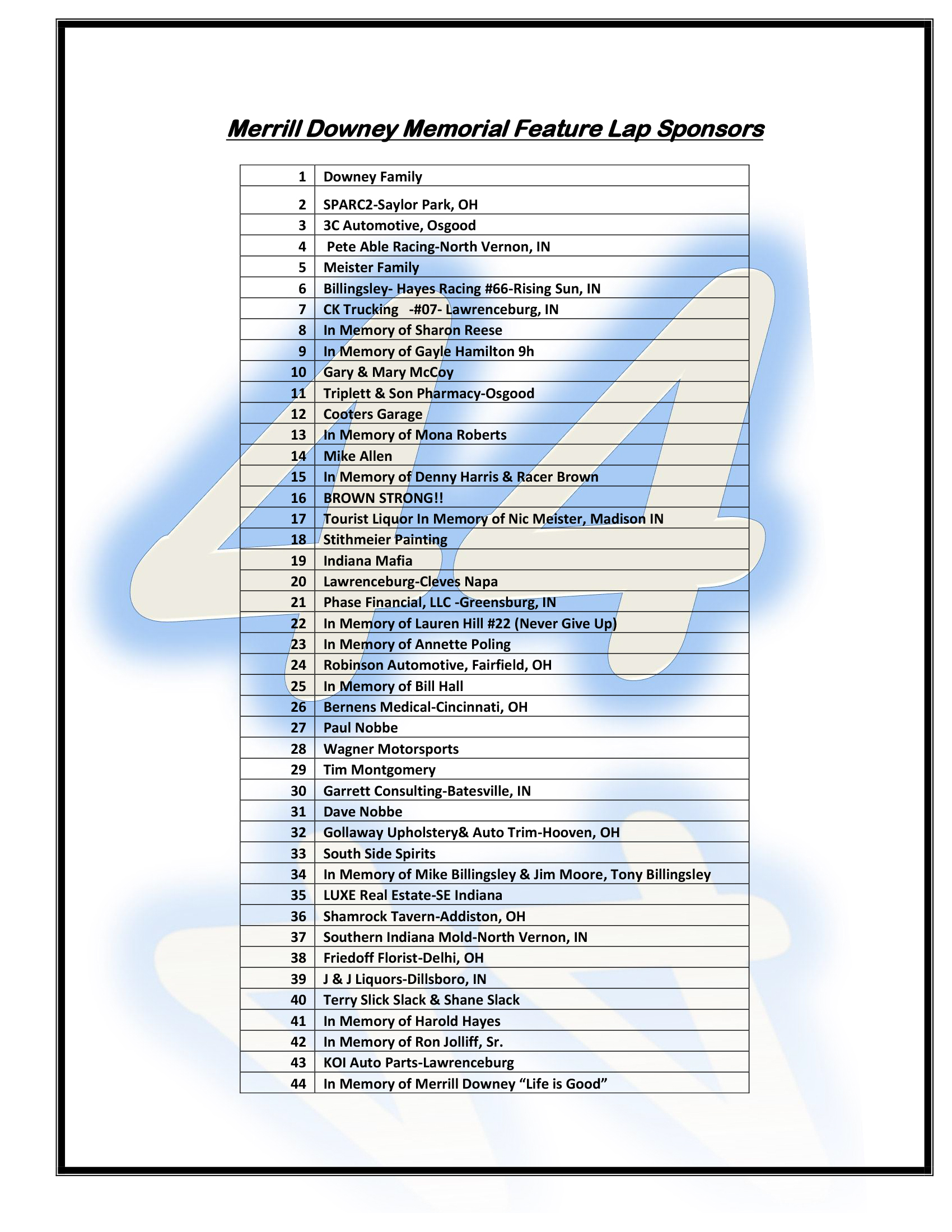 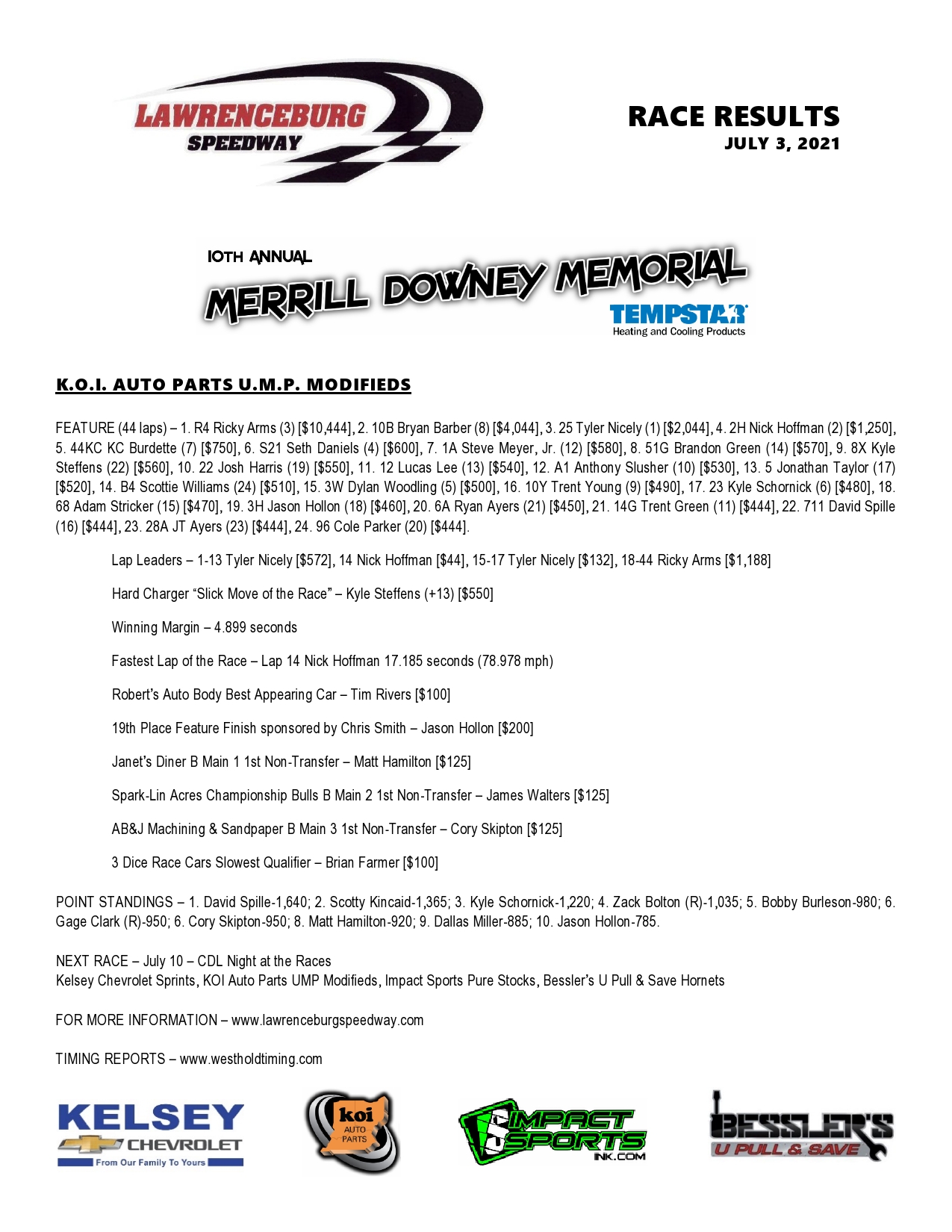 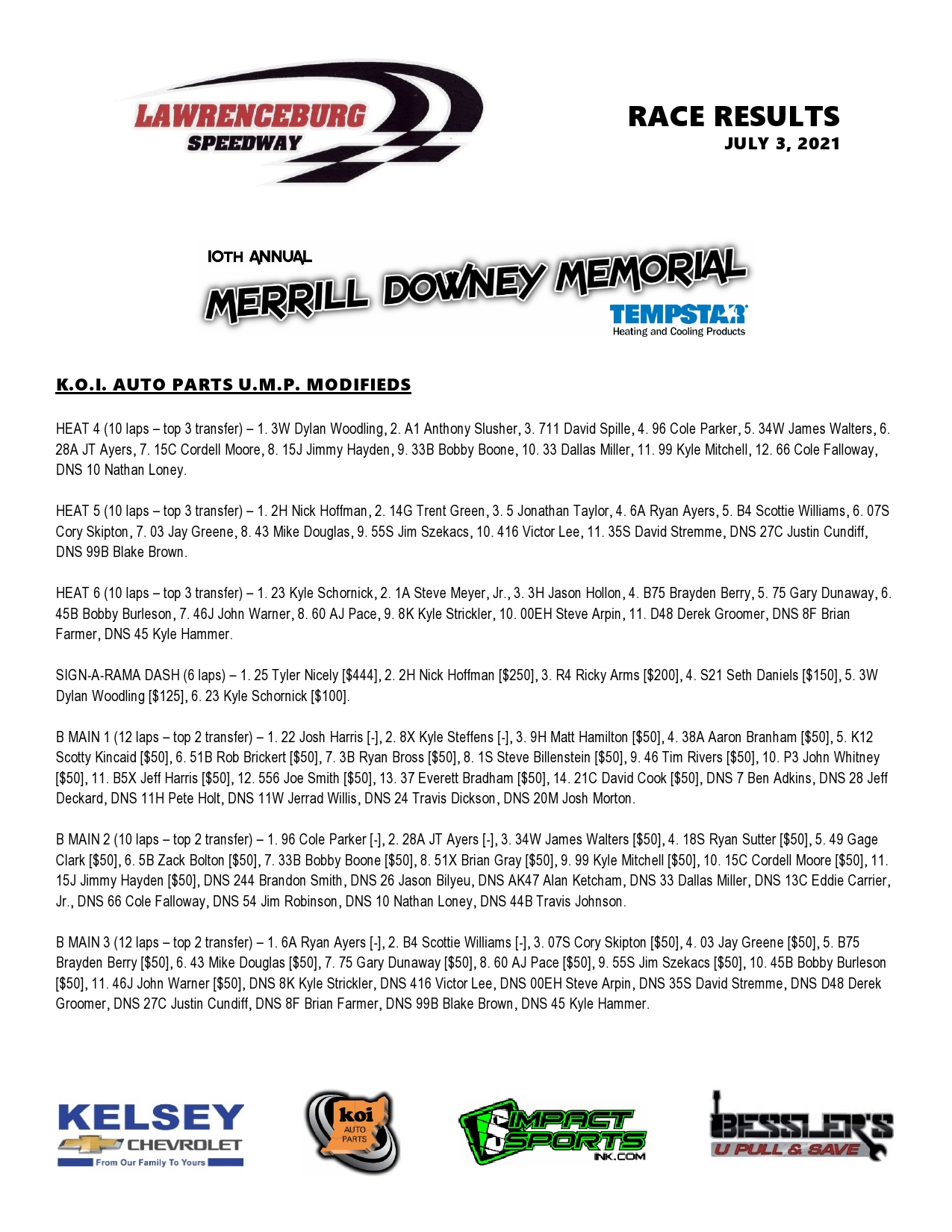 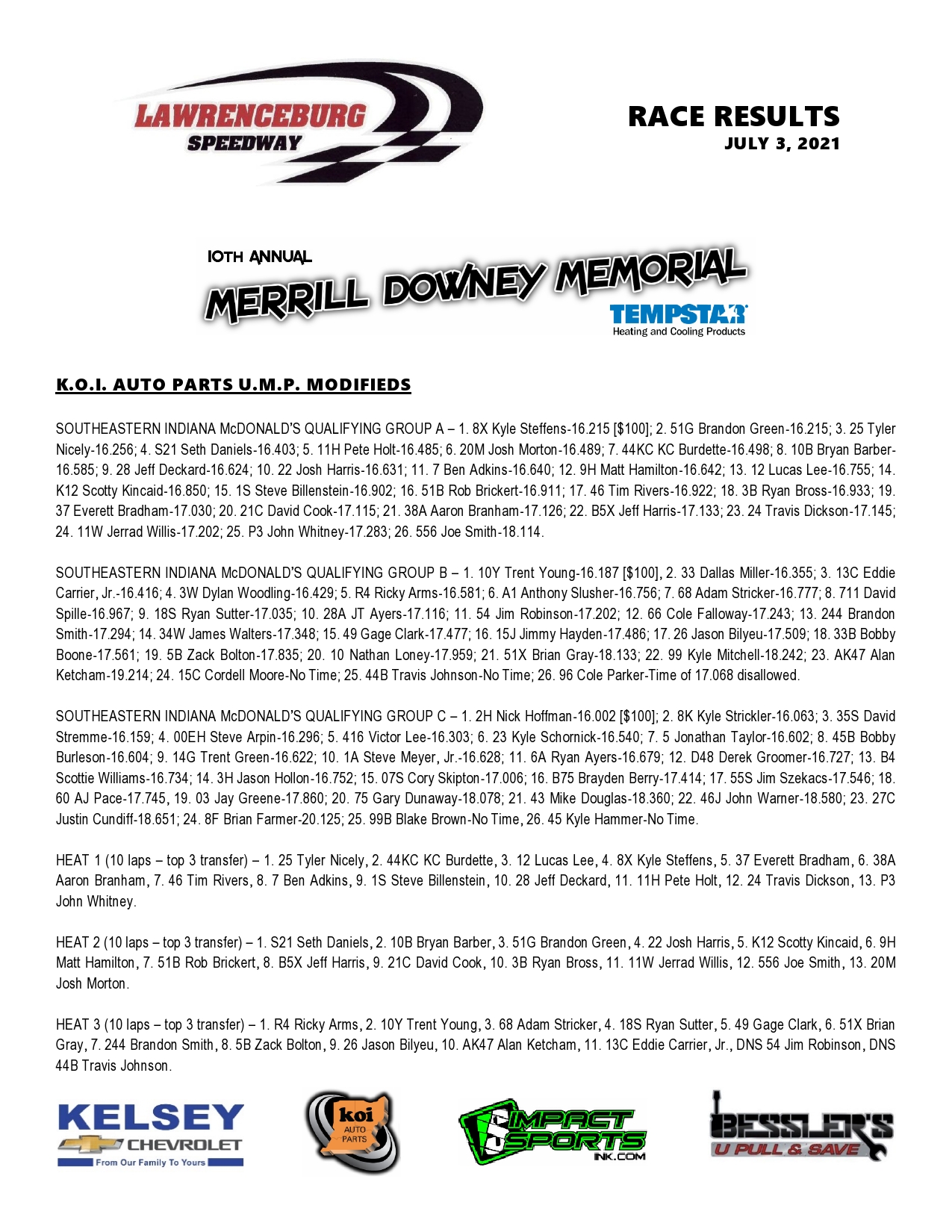 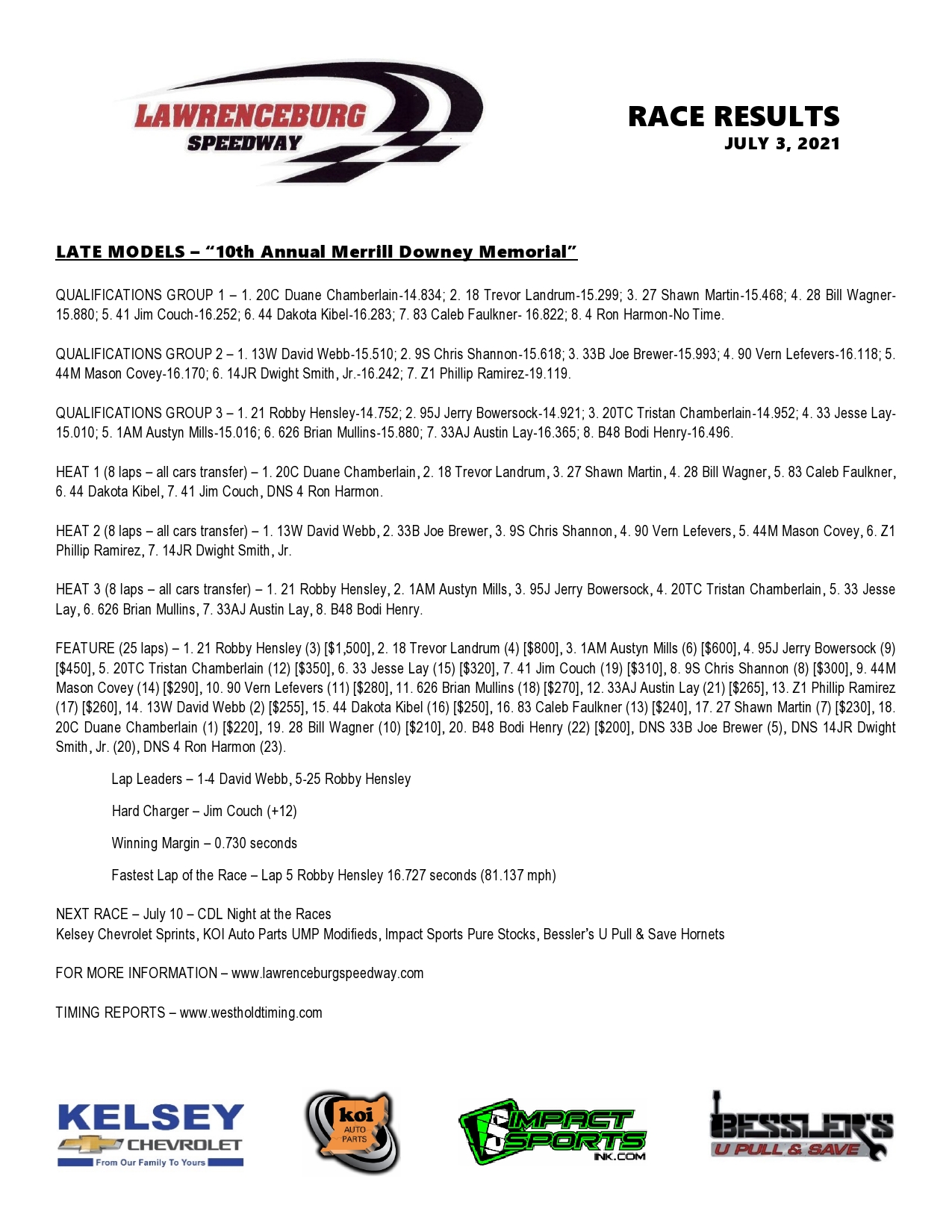