16-Year-old Saban Bibent ran a smart and determined race on Saturday night at Lawrenceburg Speedway on his way to picking up his first feature win. Bibent, the 2020 Kelsey Chevrolet Sprint Car rookie of the year has shown improvement each and every race this season and headed into the night believing he had a chance to win.  The 25-lap feature began with Ricky Lewis taking the lead at the start.  He was challenged by Defending track champ, Nick Bilbee who finally grabbed the lead from Lewis on lap 15.  This dropped Lewis back to second where he was then challenged by 16-year-old Saban Bibent.  Saban and Lewis traded slide jobs lap after lap before Bibent was able to claim the second spot before a caution flag slowed the field on lap 22.  Bilbee, the leader on the restart with 3 laps to go normally would not have an issue holding off Lawrenceburg Speedway regulars but this night would be different.  The younger up and coming driver dove to the bottom on the restart and was able to find enough grip to pull in front of Bilbee and lead the final 3 laps on his way to his first career sprint car feature win!  Bilbee finished second followed by Shane Cottle, Sterling Cling, and Ricky Lewis.  Heat race winners were Cling, Lewis, and JJ Hughes.  The Kelsey Chevrolet Sprint Cars return to the track on Saturday June 19th.

Lee Wins in Test and Tune for Merrill Downey!

Danville, Kentucky’s Victor Lee was racing at Lawrenceburg in preparation for the upcoming 10th running of the Merrill Downey Memorial on Saturday July 3rd.  For most of the 20 lap KOI Auto Parts Feature, he did not appear to have the fastest car.  That would have been the multi-time former track champ Scotty Kincaid who led handily until defending track champ, David Spille and Kincaid got together in turn 2 causing Kincaid to spin out and sending him to the tail for the restart.  This turned the lead over to Victor Lee who had no trouble leading the final 9 laps to pick up the feature win.  The former winner of the Merrill Downey Memorial in 2016, was excited that they had figured some things out for when they return July 3rd.  The rest of the top 5 was Gary Dunaway, David Lehman, Scotty Kincaid, and Cory Skipton.  Heat race winners were Burelson, Kincaid and Spille.  The KOI Auto Parts Modifieds return to the track on Saturday June 19th.

Former track champ Gary Whitt held off hard charging 14-year-old Landon Arcaro for the Besslers U Pull N Save Hornet Feature win on Saturday night at Lawrenceburg.  Whitt took the lead from Ryan Paciocco on lap 3 and led the remaining 9 laps.  It wasn’t as easy as that though, as Landen Arcaro, in his first race at Lawrenceburg gave Whitt all he could handle during those final 9 laps.  The rest of the top 5 was Landen Ramirez, Billey Moore, and Tony Pollard.  Heat race winners were Arcaro, Jesse Ramirez, and Gary Whitt.  The Besslers U Pull N Save Hornets return to the track on Saturday June 19th.

Back-to-back and defending track champion Joel Andrews, finally reached victory lane in 2021 after holding off hard charging Will McRoberts, the all-time winningest driver in the Impact Sports Purestocks history at Lawrenceburg Speedway.  McRoberts after winning multiple times already in 2021 had to start at the tail.  He quickly made his way to second but could not get around Andrews for the win.  Andrews officially led all 12 laps to pick up the feature win.  The rest of the top 4 was John Heaston, Danny Eichler, and Ronnie Baker.  Heat race winners were Andrews and McRoberts.  The Impact Sports Purestocks return to the track on Saturday June 19th. 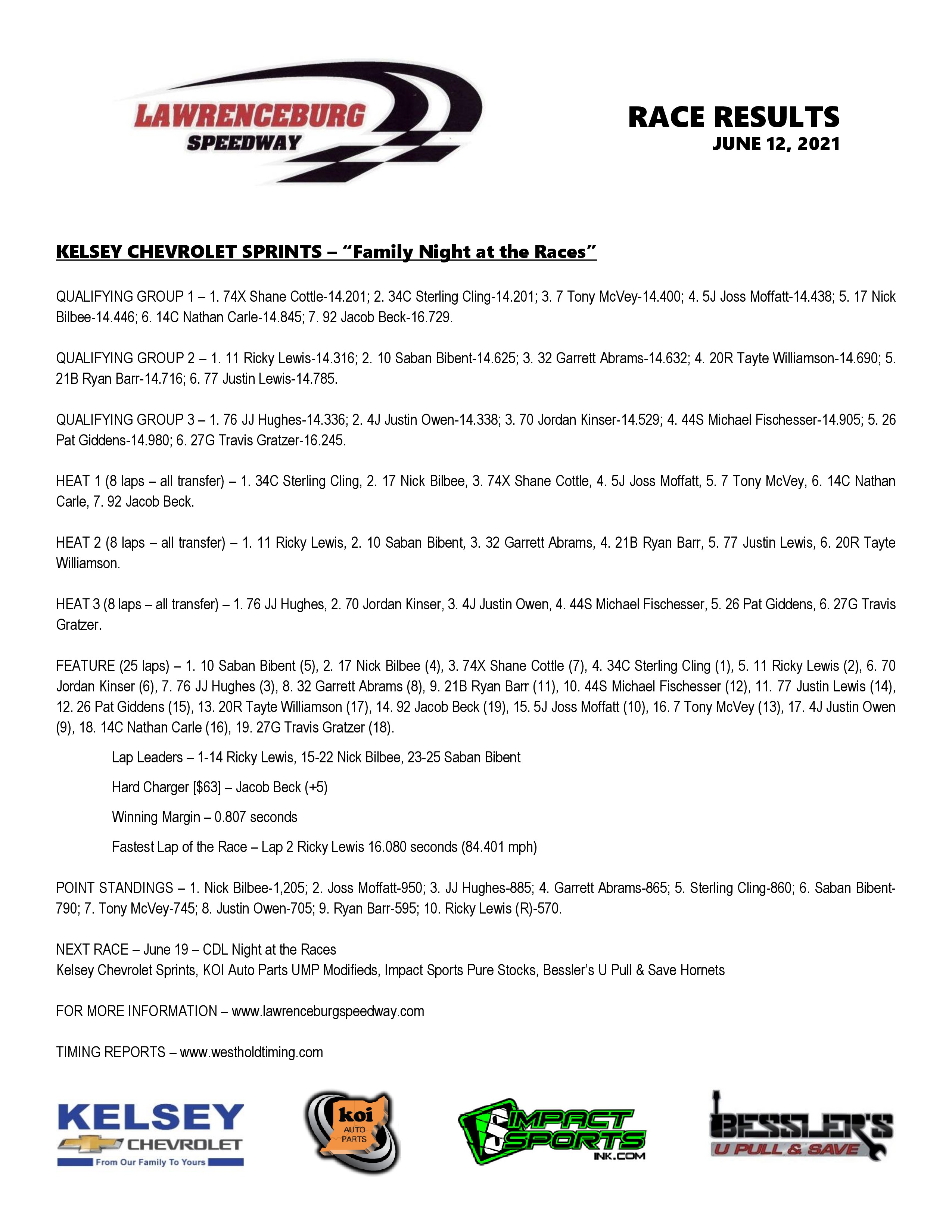 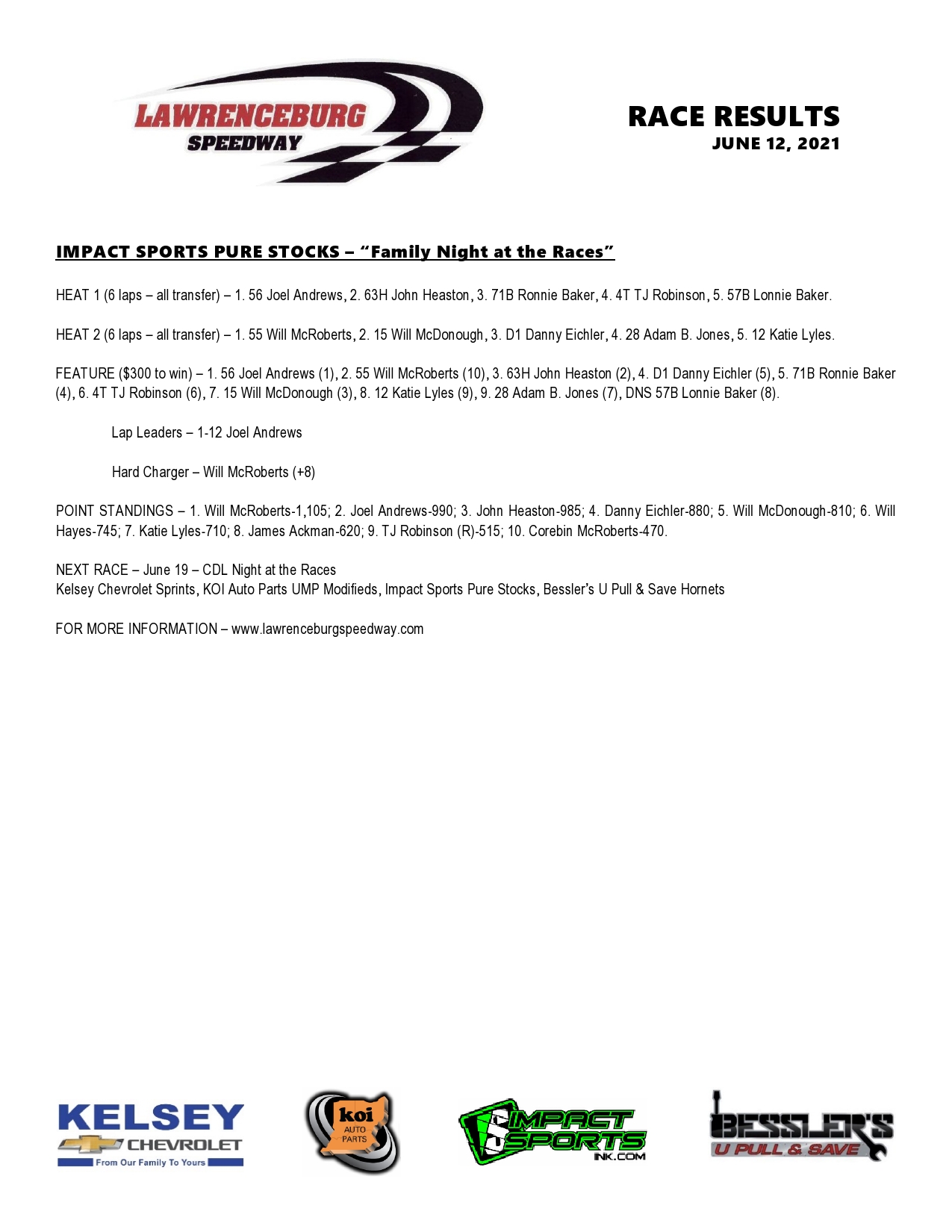 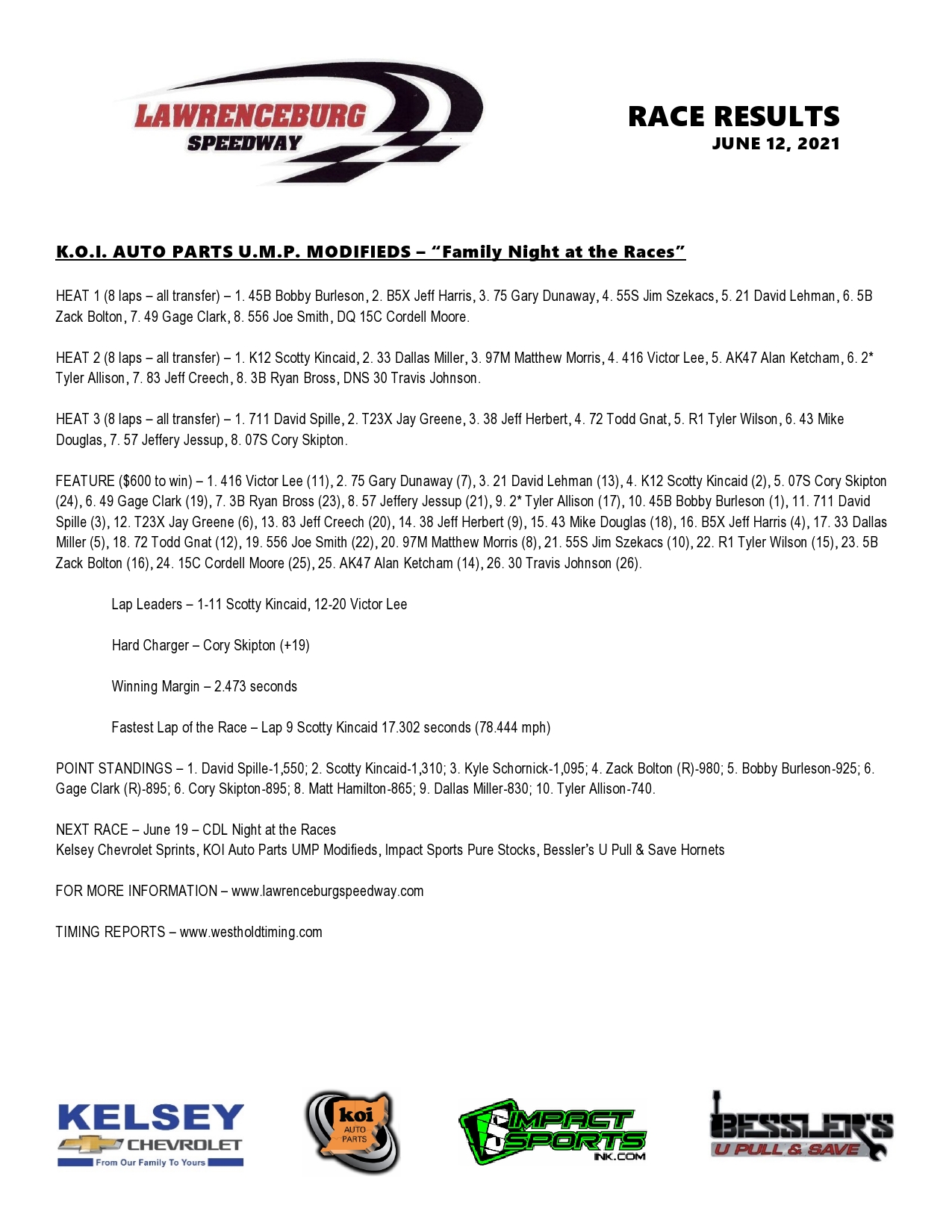 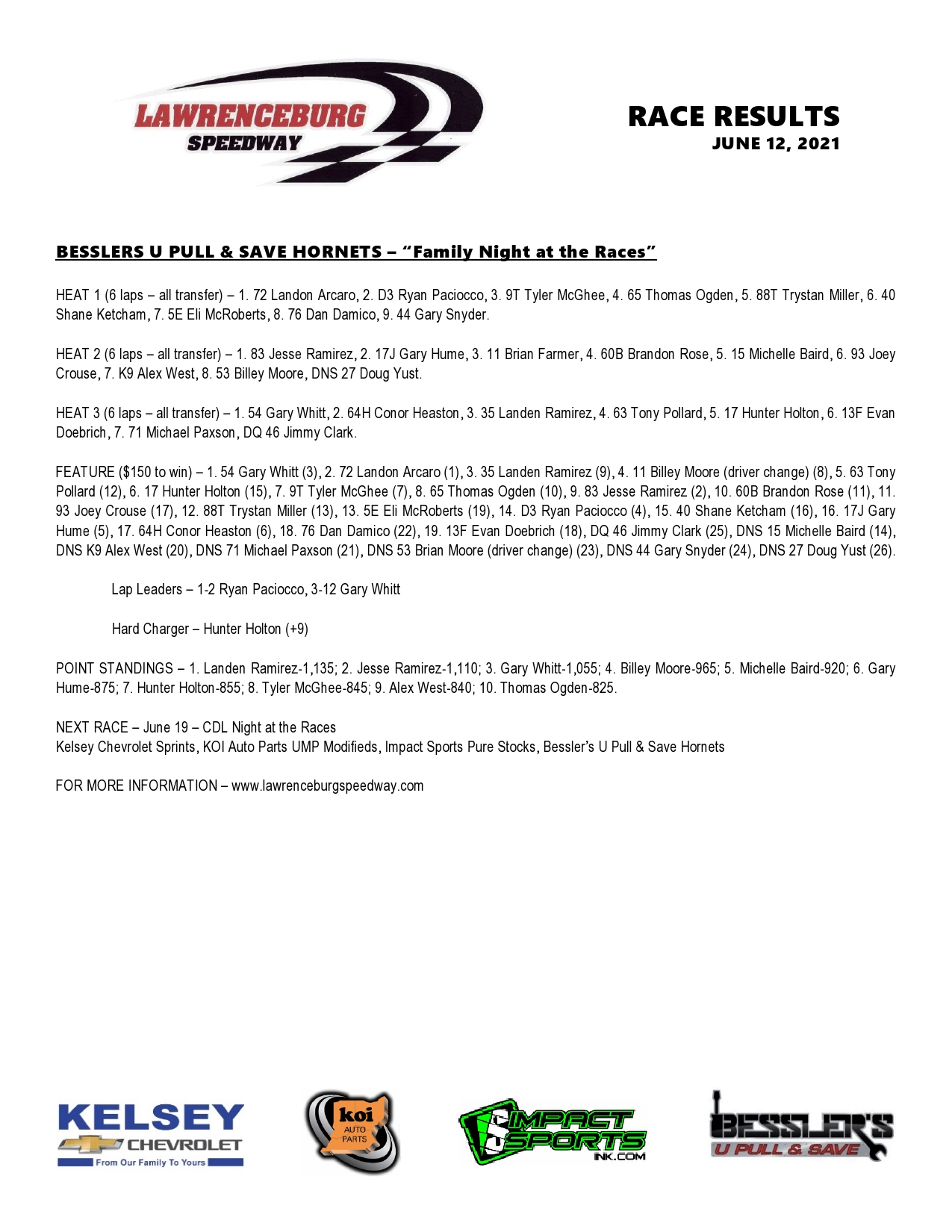