Justin Grant picked up his 13th career Sprint Car Feature win at Lawrenceburg Speedway Saturday night by winning the BOSS/Kelsey Chevrolet Sprint Car Feature.  Grant started from the 15th position and methodically worked his way to the front while the drivers who started up front battled amongst themselves.  JJ Hughes took the lead at the green flag until Thomas Meseraull grabbed the lead away from him on lap 3.  TMEZ would pace the field for 10 laps until Brady Bacon grabbed the top spot.  Caution flags allowed the field to bunch back up which helped Justin Grant stay in contention.  On the final green flag run, Grant would be close enough to mount on challenge on Bacon and sweep to the lead with just 3 laps remaining as they fought in lapped traffic.  Grant would hold off Bacon, Meseraull, Nick Bilbee, and Tyler Kendall for the feature win.  Heat race winners were Meseraull, Bilbee, Bacon, and Westfall.  Scotty Weir and Cody White won the B-mains.  The Kelsey Chevrolet Sprint Cars return to the track on Saturday June 5th.

Florence, Kentucky’s Pete Holt has won at Lawrenceburg before.  If it weren’t for bad luck, he’d most likely have another handful of wins.  Several times in the past, Holt would be in position for the win only to have the win snatched away due to a mechanical failure or crash.  On this night, Holt would lead all 20 laps on his way to picking up the feature win.  Defending track champ, David Spille finished second followed by Cory Skipton, Steve Billenstein, and Gary Dunaway.  Heat race winners were Holt and Billenstein.  The KOI UMP Modifieds return to Lawrenceburg on Monday My 31st with the World of Outlaws Sprint Cars.

Cordell Moore took the lead early on in the 12 lap Besslers U Pull N Save Feature and led the final 10 laps on his way to the Hornet feature win.  The rest of the top 5 was Michelle Baird, Jesse Ramirez, Thomas Ogden and Landen Ramirez.  Heat race winners were Gary Whitt, Michelle Baird and Cordell Moore.  The Besslers U Pull N Save Hornet return to the track on Monday, May 31st.

Will McRoberts has had to start at the tail of the feature the previous two weeks by virtue of winning two Purestock features in a row.  That hasn’t seemed to slow down the all-time winningest driver in the Purestock division at Lawrenceburg.  He has simply started at the back and won both times.  This race it took McRoberts 7 laps to get to the lead and once he did, he never looked back.  The rest of the top 5 was Will Hayes, John Heaston, Danny Eichler and Mike Ackman.  Heat race winners were Mike Ackman and John Heaston.  The Impact Sports Purestocks return to Lawrenceburg on Saturday, June 12th. 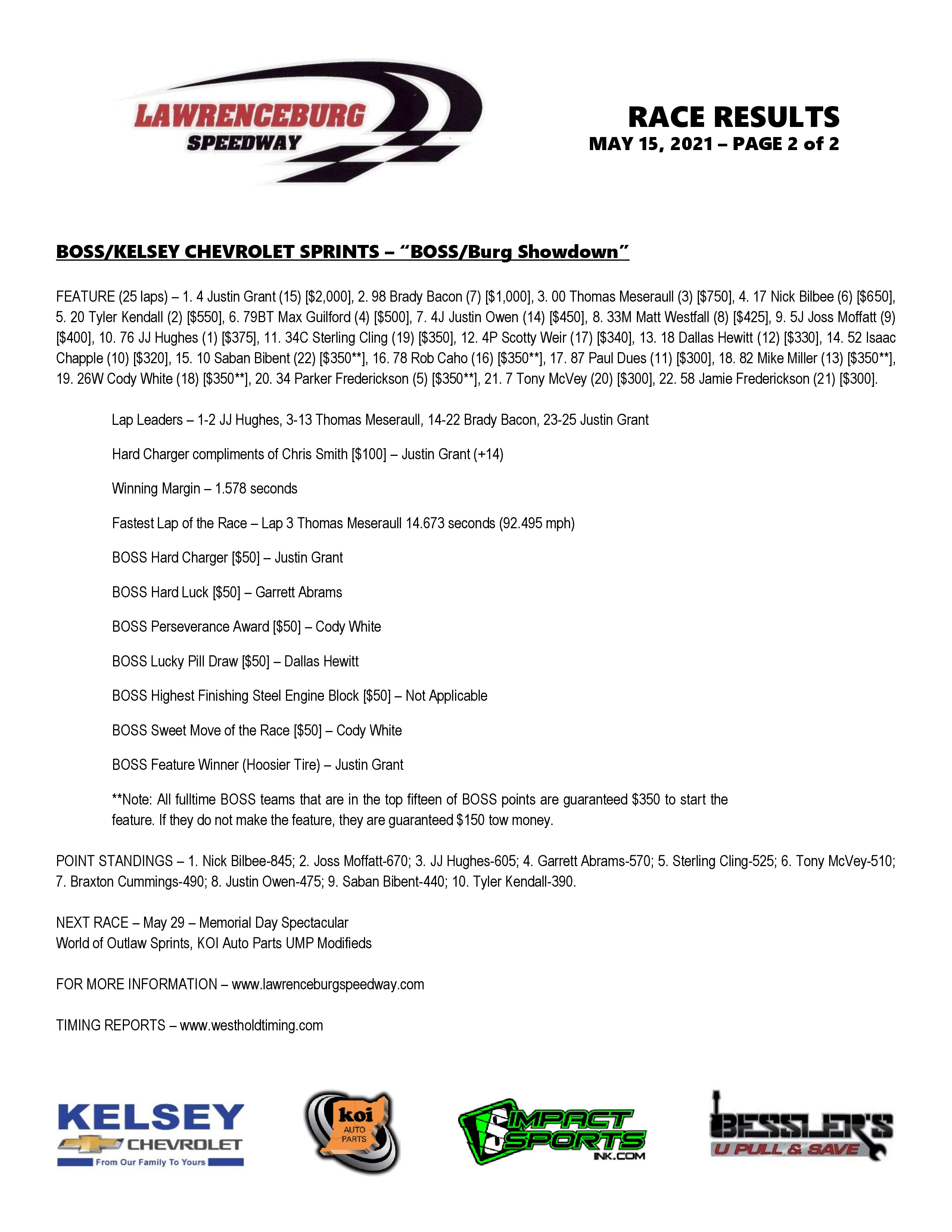 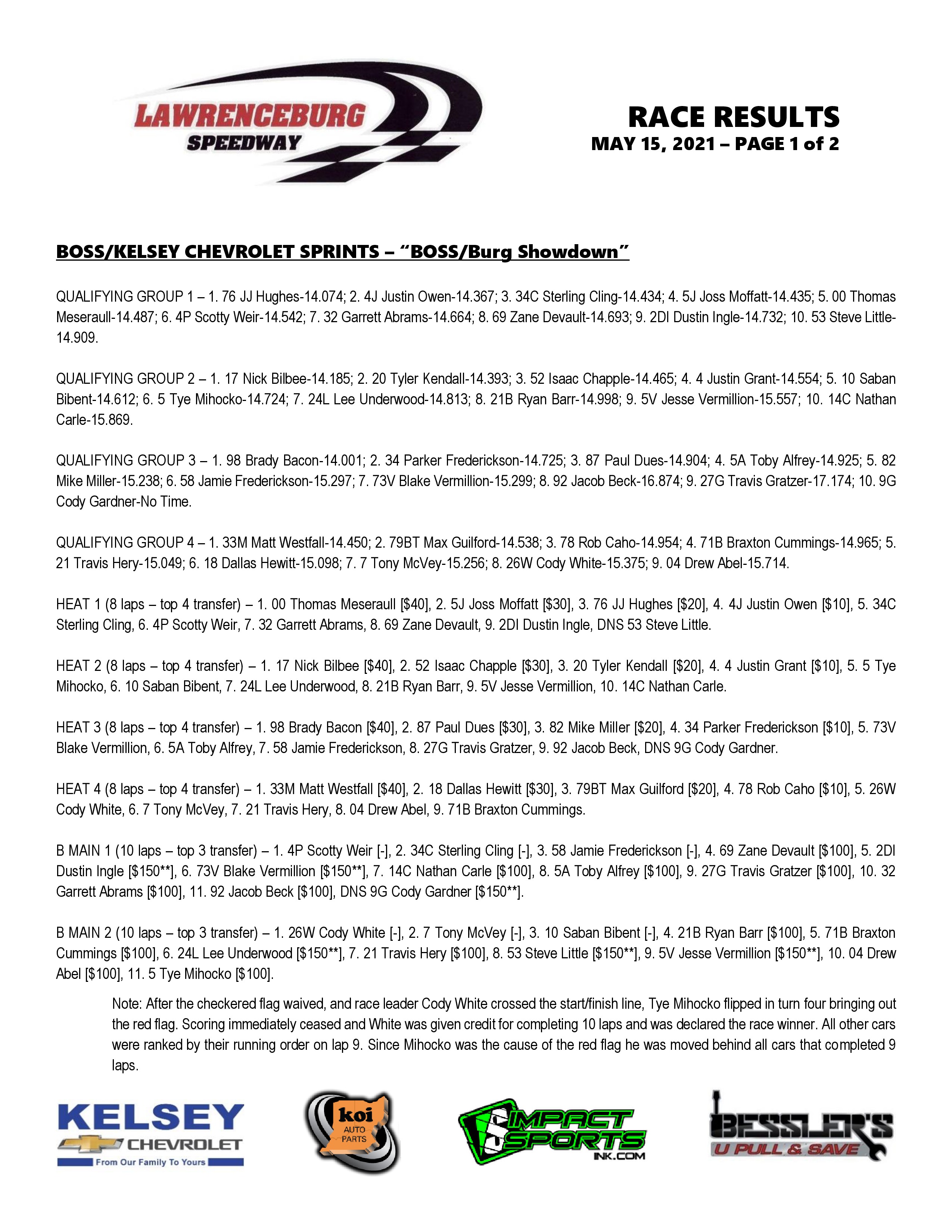 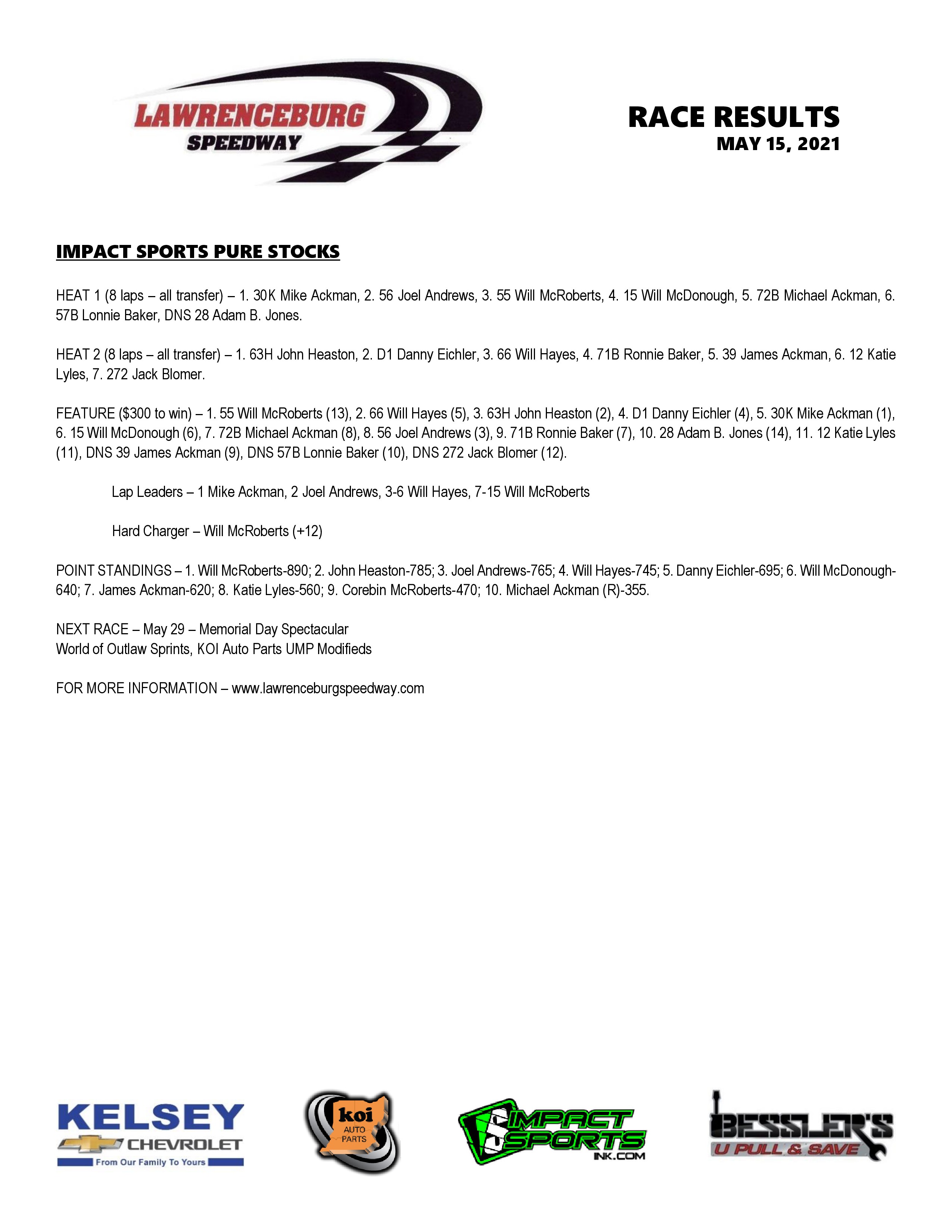 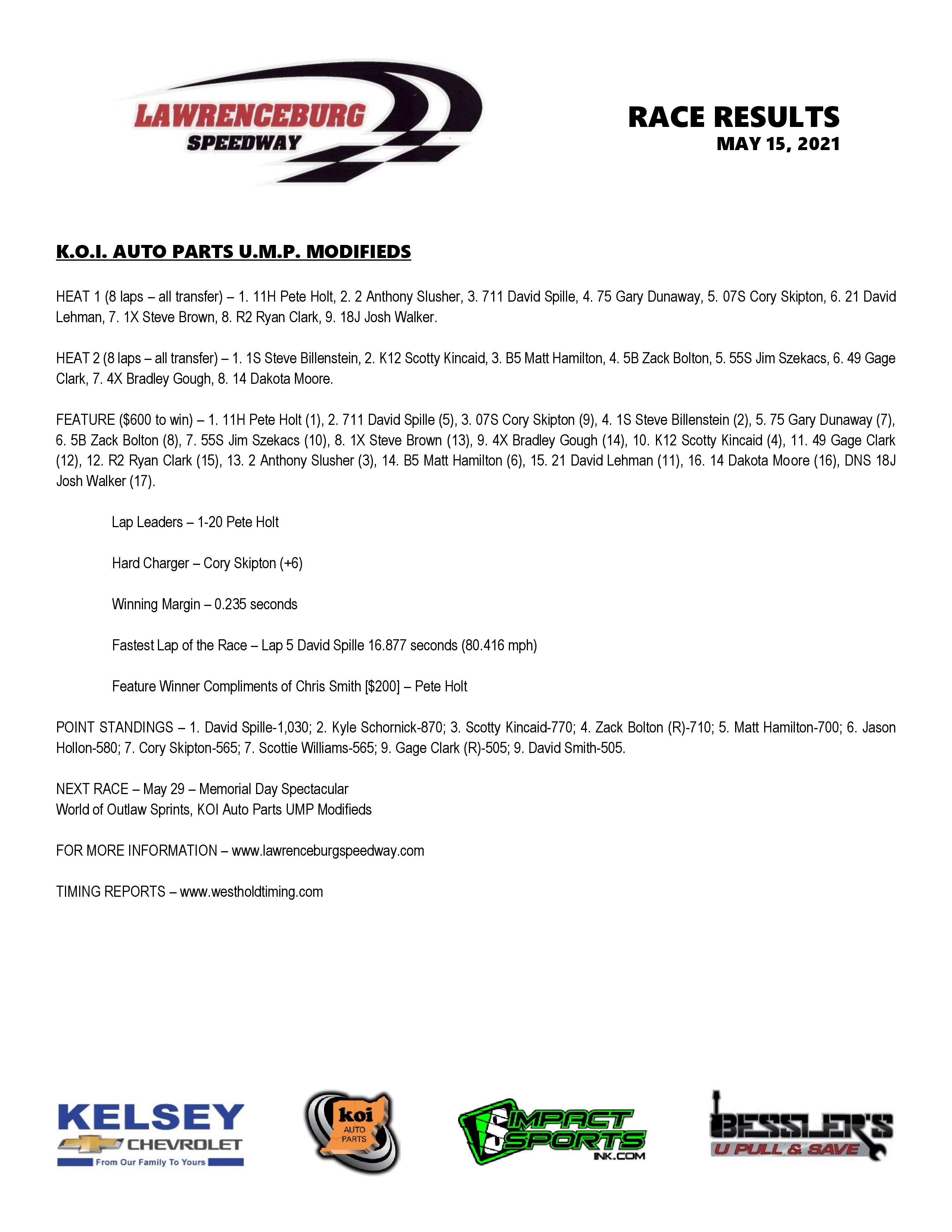 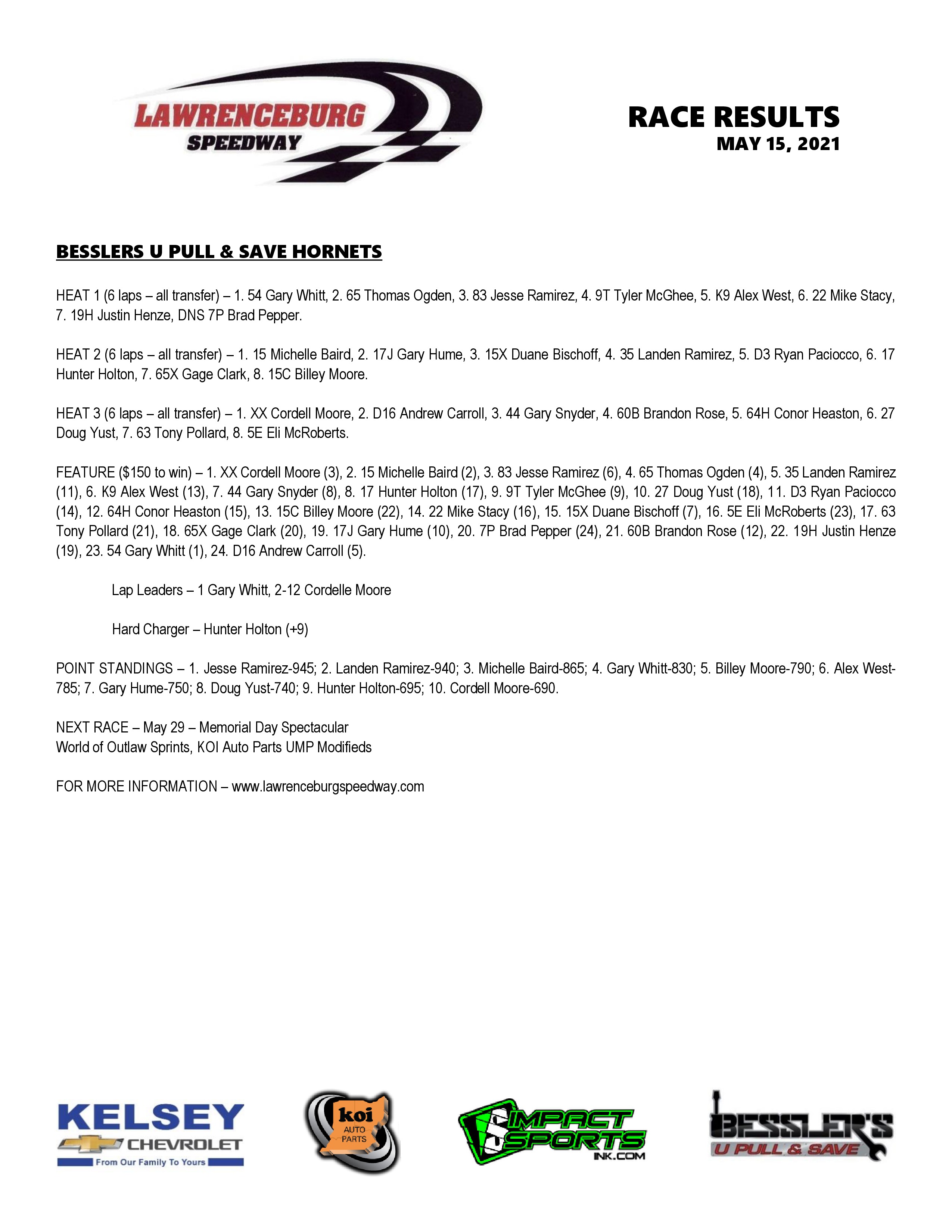