Camarillo, California’s Ricky Lewis picked up his first feature win at Lawrenceburg Speedway on Saturday night in dramatic fashion.  Lewis battled with Lawrenceburg regulars Sterling Cling and defending champ Nick Bilbee on his way to securing his first win.  The 25 lap Kelsey Chevrolet Sprint Car Feature race saw multiple lead changes and slide jobs throughout the exciting race.   Lewis would grab the lead on the opening lap before Cole Bodine grabbed the top spot away on lap 4 and led until Sterling Cling snagged the top spot on lap 11.  Lewis was a man on a mission.  He would not be denied.  He traded the lead with Cling lap after lap until securing the top spot on lap 22 and holding on for the win.  Bilbee finished second followed by Joss Moffatt, Cole Bodine and Travis Hery.  Sterling Cling would finish 9th after contact with Bilbee on the final lap.  Heat race winners were Cole Bodine and Ricky Lewis.  The Kelsey Chevrolet Sprint Cars return to the track with The BOSS Sprint Car Series on Saturday May 15th.

Kyle Schornick is dominating the modified races at Lawrenceburg thus far in 2021.  He won for the third time in 2021 and led all 20 laps in the process, something he has done more than once this year.  Believe it or not, he has already admitted he is most likely not running for points as they are expecting another baby.  He may not win the championship but there is no doubt that when he shows up, he is the car to beat in the KOI UMP Modified series at Lawrenceburg.  The rest of the top 5 was David Spille, Matt Hamilton, Scottie Williams and Jeffrey Jessup.  Heat race winners were Spille, Schornick, and Scotty Kincaid.  The KOI Auto Parts Modifieds return to the track on Saturday May 15th.

Gary Hume picked up his second feature win of the year in the Bessler’s U Pull N Save Hornet Feature Saturday night at Lawrenceburg.  Hume led all 12 laps to pick up the feature win.  Landen Ramirez finished second followed by Bobbo Smith, Cordell Moore, and Jesse Ramirez.  Heat race winners were Gary Hume, Landen Ramirez, and Bobbo Smith.  The Bessler’s U Pull N Save Hornets return to the track on Saturday May 15th.

Will McRoberts picked up his third win of 2021 at Lawrenceburg by beating multi time and defending track champ Joel Andrews who had a broken left front.  John Heaston would lead lap one from the pole before seventeen-year-old Will Hayes would get around him for the lead on lap 4.  Hayes would slip in turn 2 allowing Andrews to sneak underneath him and grab the top spot.  Andrews would hold off McRoberts for several laps until Andrews’ Left front wheel would break from an earlier problem in the heat race.  Andrews tried to hold on but McRoberts was able to pass him for the lead and win.  James Ackman finished second followed by Andrews, John Heaston, and Danny Eichler.  Heat race winners were John Heaston and Will McRoberts.  The Impact Sports Purestocks Return to the burg on Saturday, May 15th. 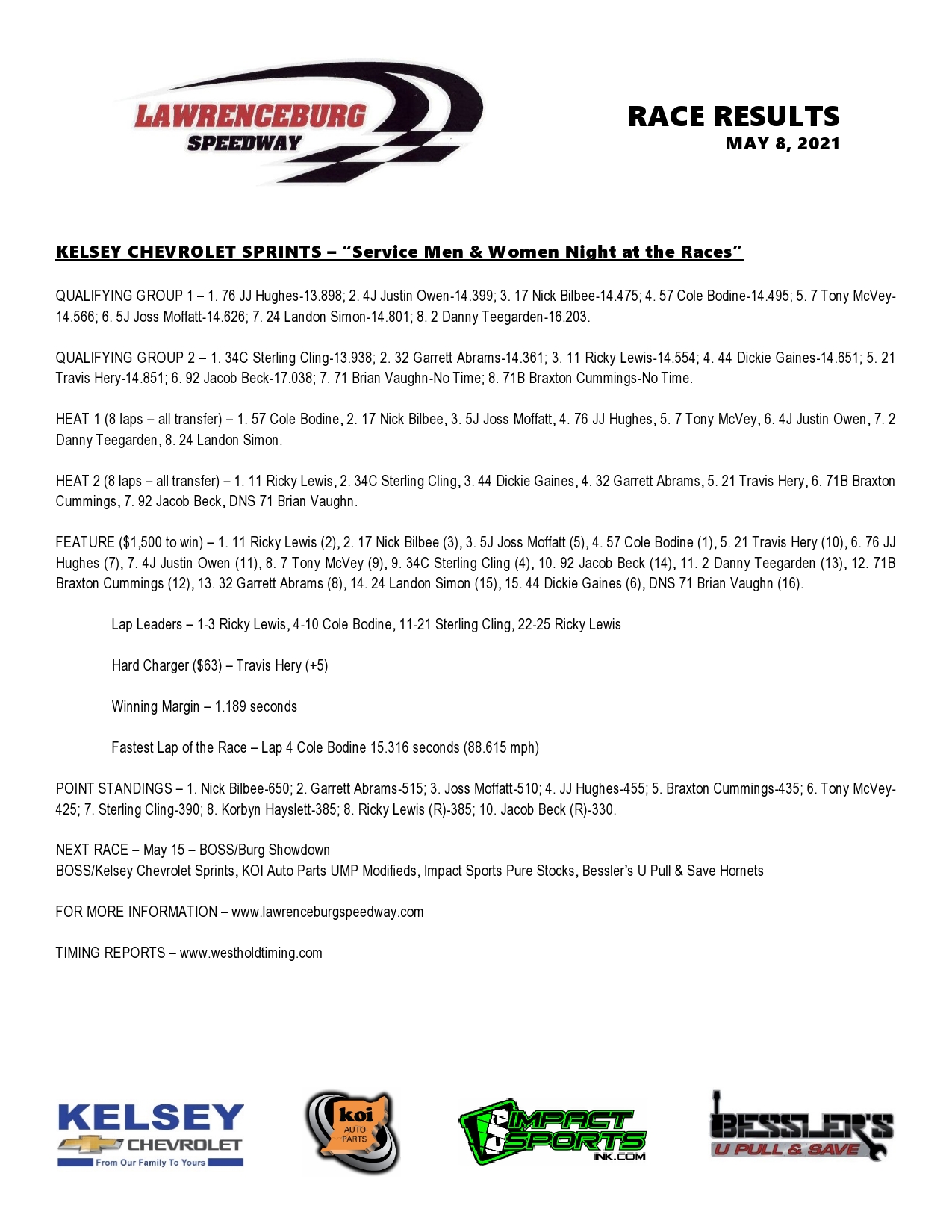 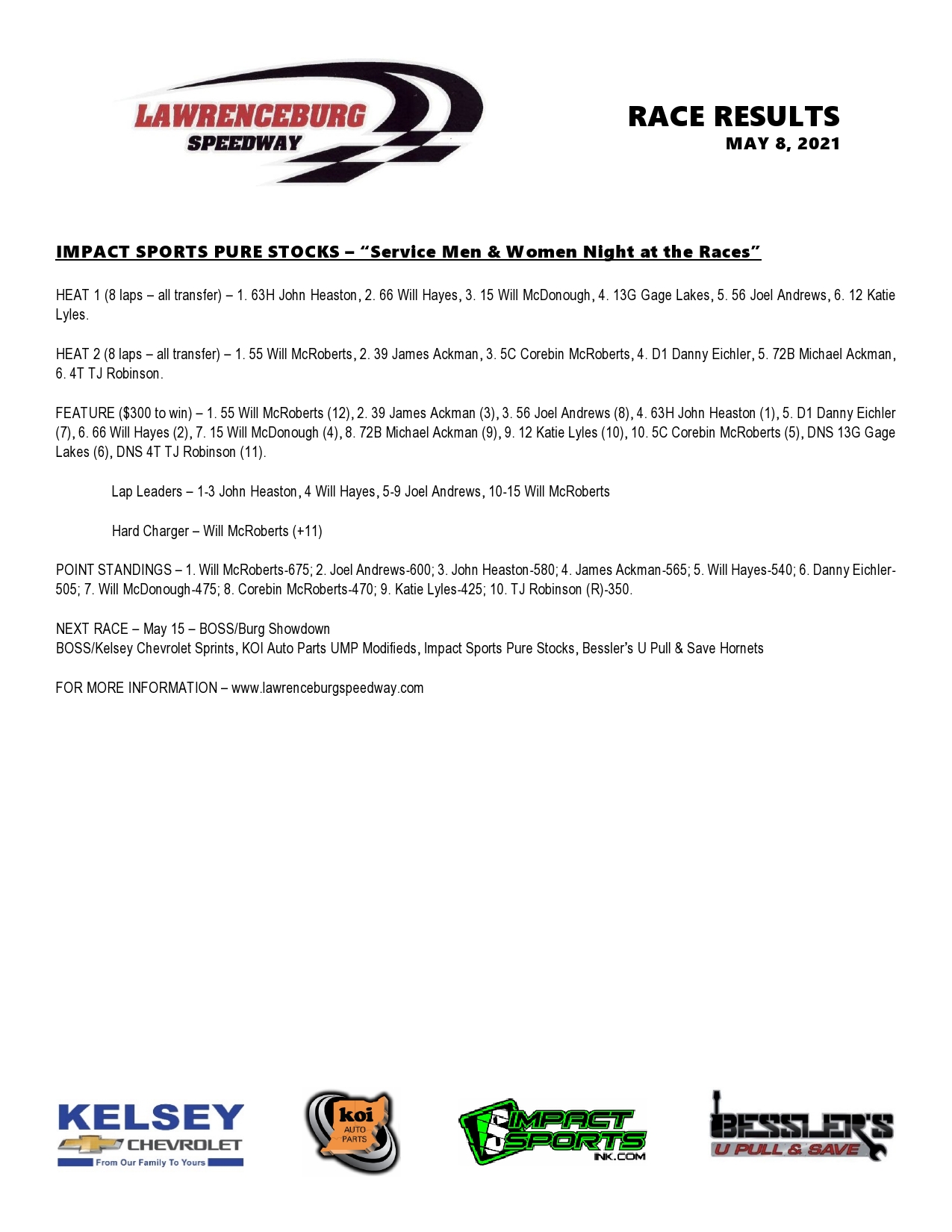 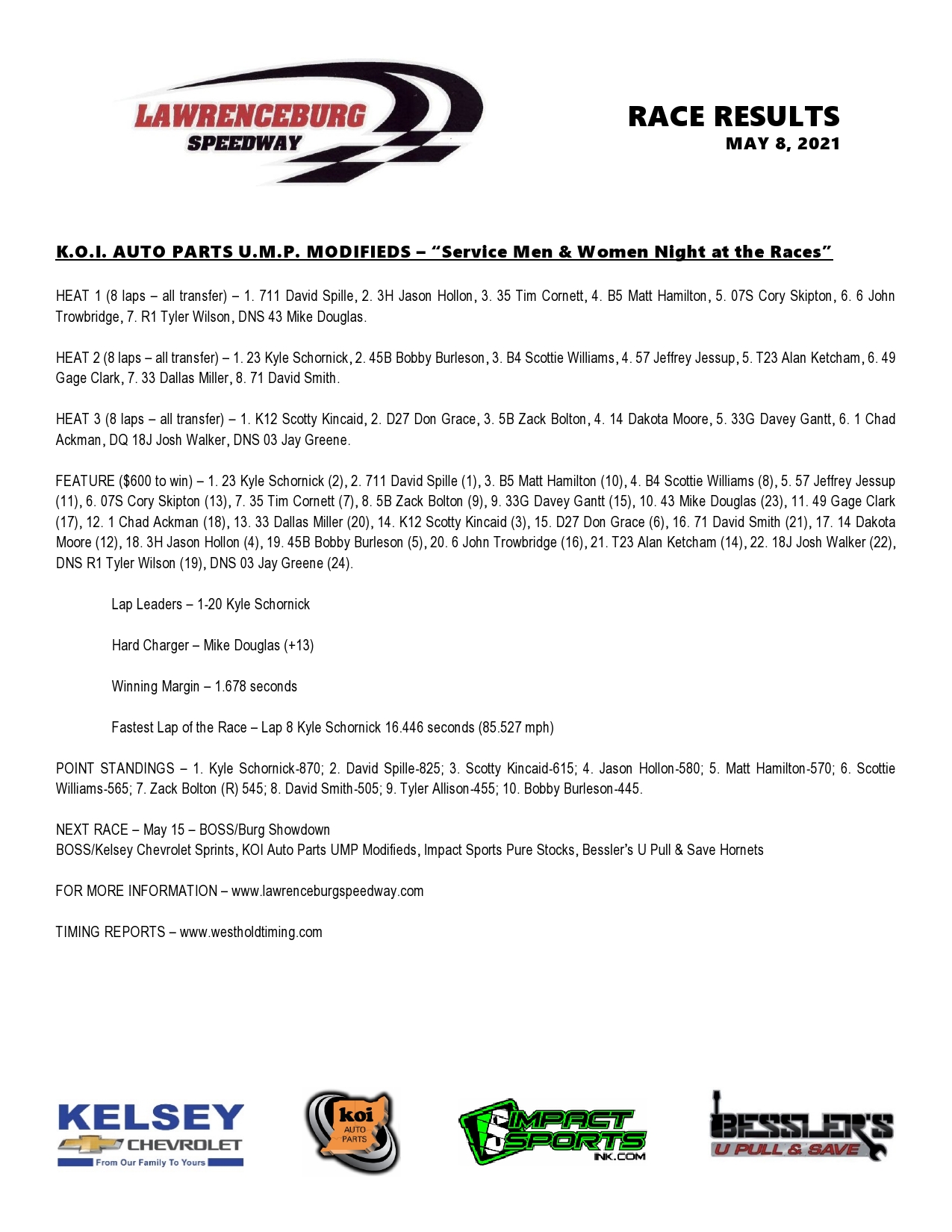 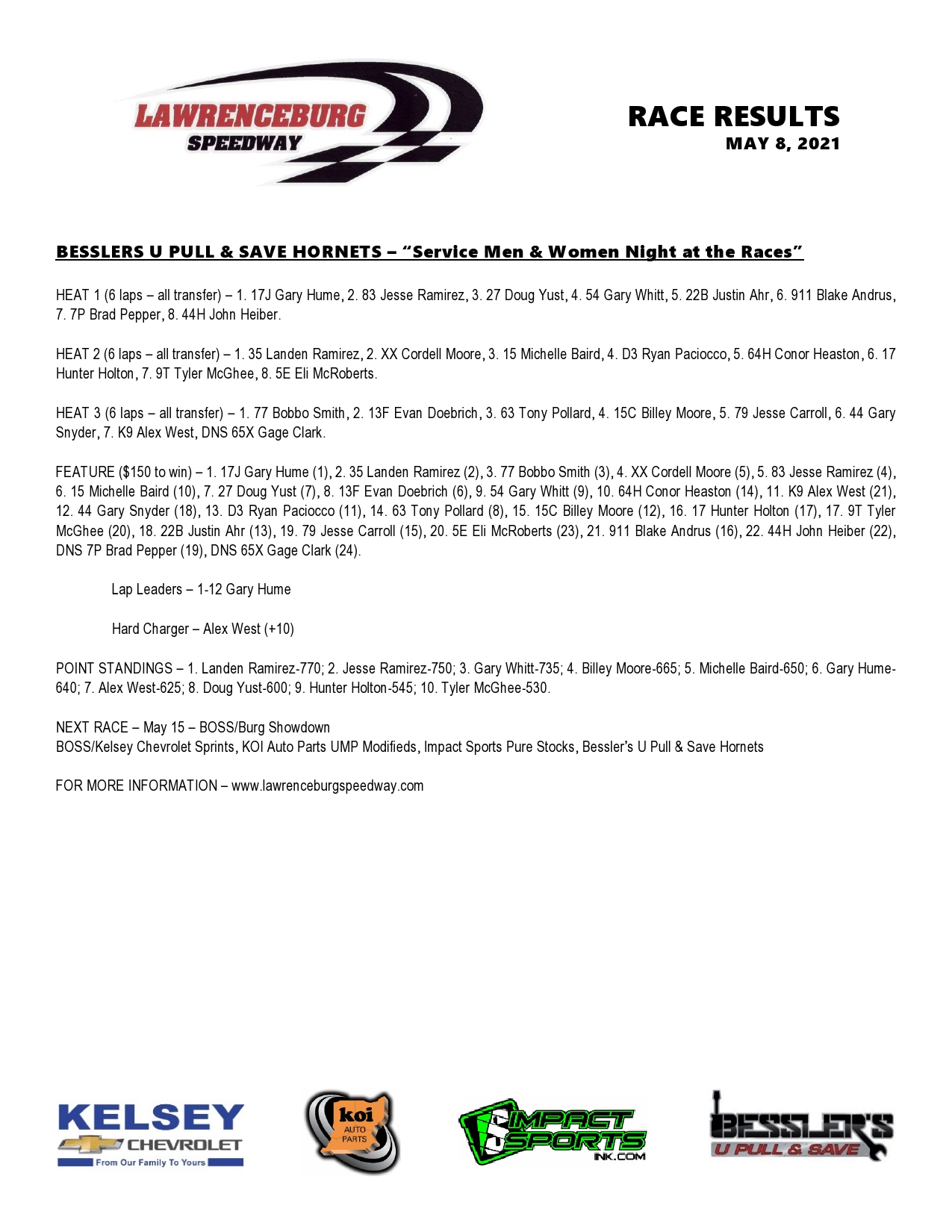