Adams Crowned King of the Midwest in Kelsey Chevrolet Sprints!

Loomis, California’s Max Adams picked up his second feature win at Lawrenceburg Speedway this past Saturday night when he passed defending track champ Nick Bilbee on lap 19.  He would lead the final 6 laps on his way to picking up the win and was crowned the 2021 King of the Midwest at Lawrenceburg.  Nick Bilbee would take the green flag and quickly jump to the lead and setting the pace for the 20 car feature field.  The feature was slowed when points contender, JJ Hughes flipped in turn 4 trying to pass second place running Sterling Cling.  Hughes had been the fastest car on the track according to timing and scoring.  He was unhurt, but both Hughes and Cling’s nights had come to an end.  When the race returned to green flag conditions, Bilbee set the pace again while the likes of Adams, Korbyn Hayslett, Garrett Abrams and Saban Bibent battled with each other in the top 5.  Adams beat Bilbee across the line followed by Hayslett, Abrams, and Bibent.  2020 Rookie of the year, Saban Bibent was the hard charger passing 10 cars from his original starting position. Heat race winners were Adams, Cling, and Bilbee.  The Kelsey Chevrolet Sprint Cars return to the track next Saturday May 8th, 2021.

Kyle Schornick has arguably been the most dominant KOI Auto Parts Modified driver in the last year, dating back to 2020.  He has won more races than any other driver and has consistently run up front even when he hasn’t won.  This was one of those dominant performances where he led all 20 laps picking up his second win of the season.  Scottie Williams had his best finish of the year, followed by Matt Hamilton, David Spille and Bobby Burleson.  Heat race winners were Williams, Kyle Herbert, Burelson, and Jason Hollon.  The B main winner was Andy Sherley.  The race included a 9 car pileup on the opening lap that eliminated several cars.  The KOI Auto Parts Modifieds return to the track on Saturday May 8th, 2021.

Michelle Baird has tried and tried to win.  Each time, bitten by bad luck she had fallen short of being the first car to cross the start finish line.  There was no doubt from the drop of the green flag who the dominant car was, Michell Baird.  She took the lead on the opening lap and led all 12 laps.  She was never challenged, as it was an impressive drive.  Baird’s win was a long time coming, and very popular among the fans in the stands.  The rest of the top 5 was Billey Moore, Gary Whitt, Gary Hume, and Landen Ramirez.  Heat race winners were Hume, Ramirez, Gage Allen, and Cordell Moore.  Landen Ramirez and Hunter Holton won the B-mains.  The Besslers U Pull N Save Hornets return to the track on Saturday May 8th. 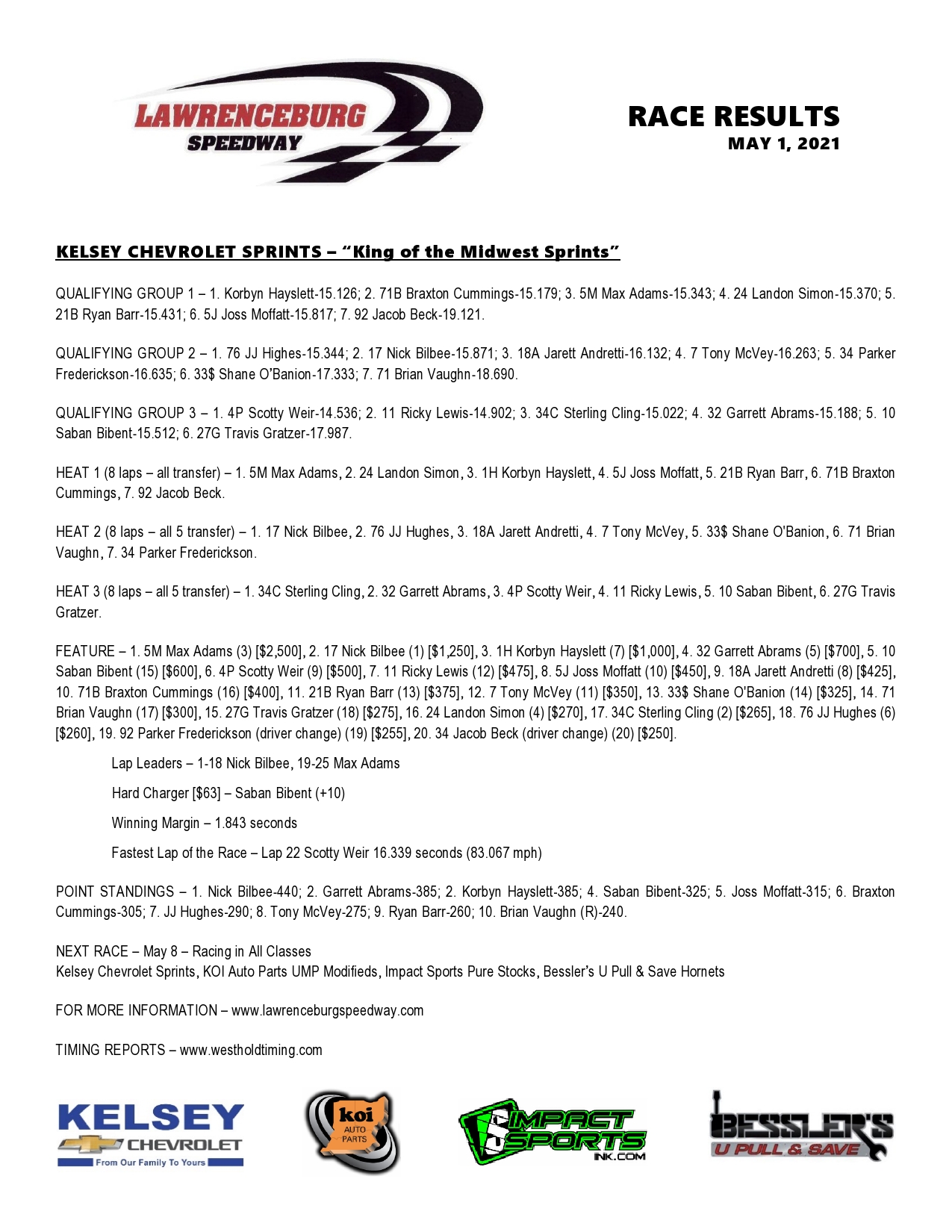 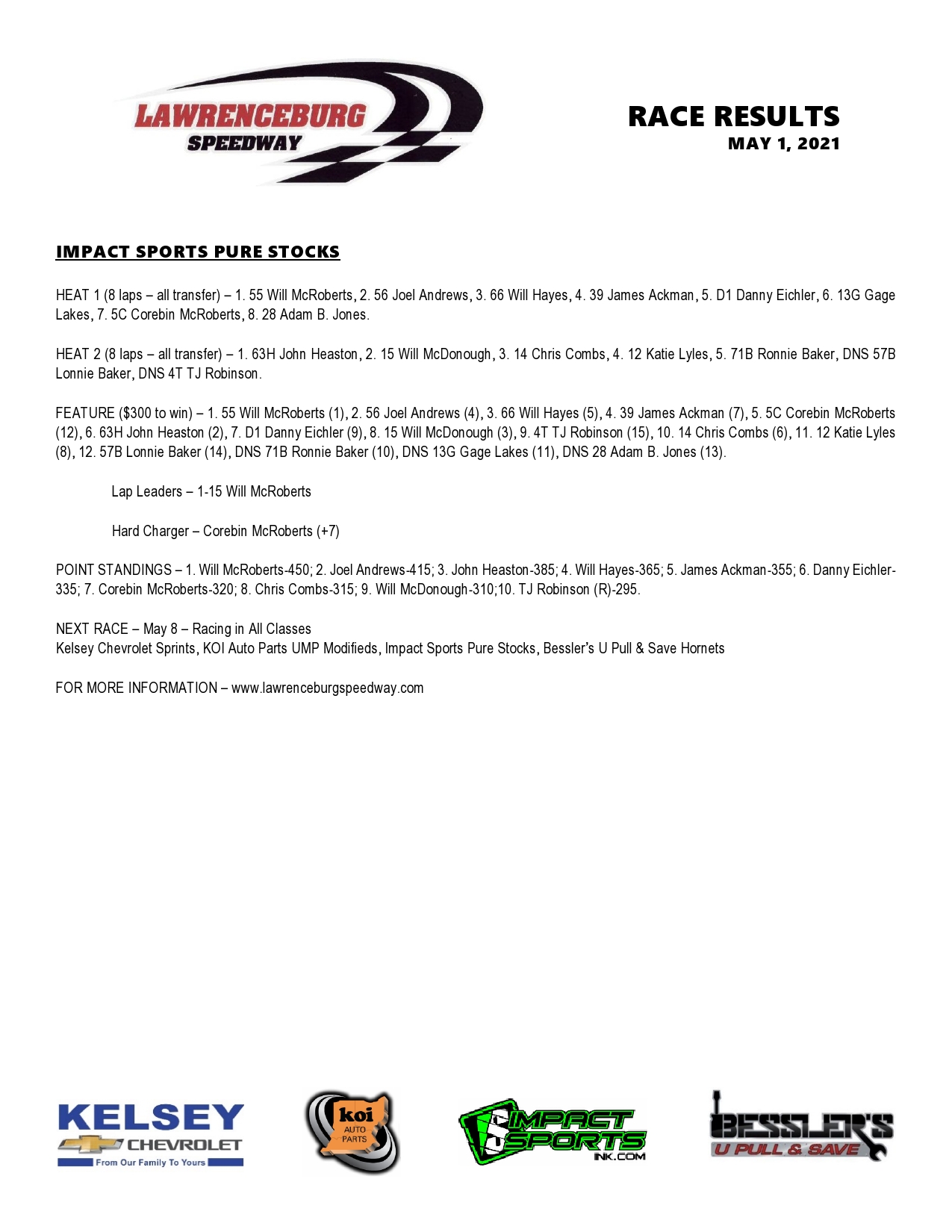 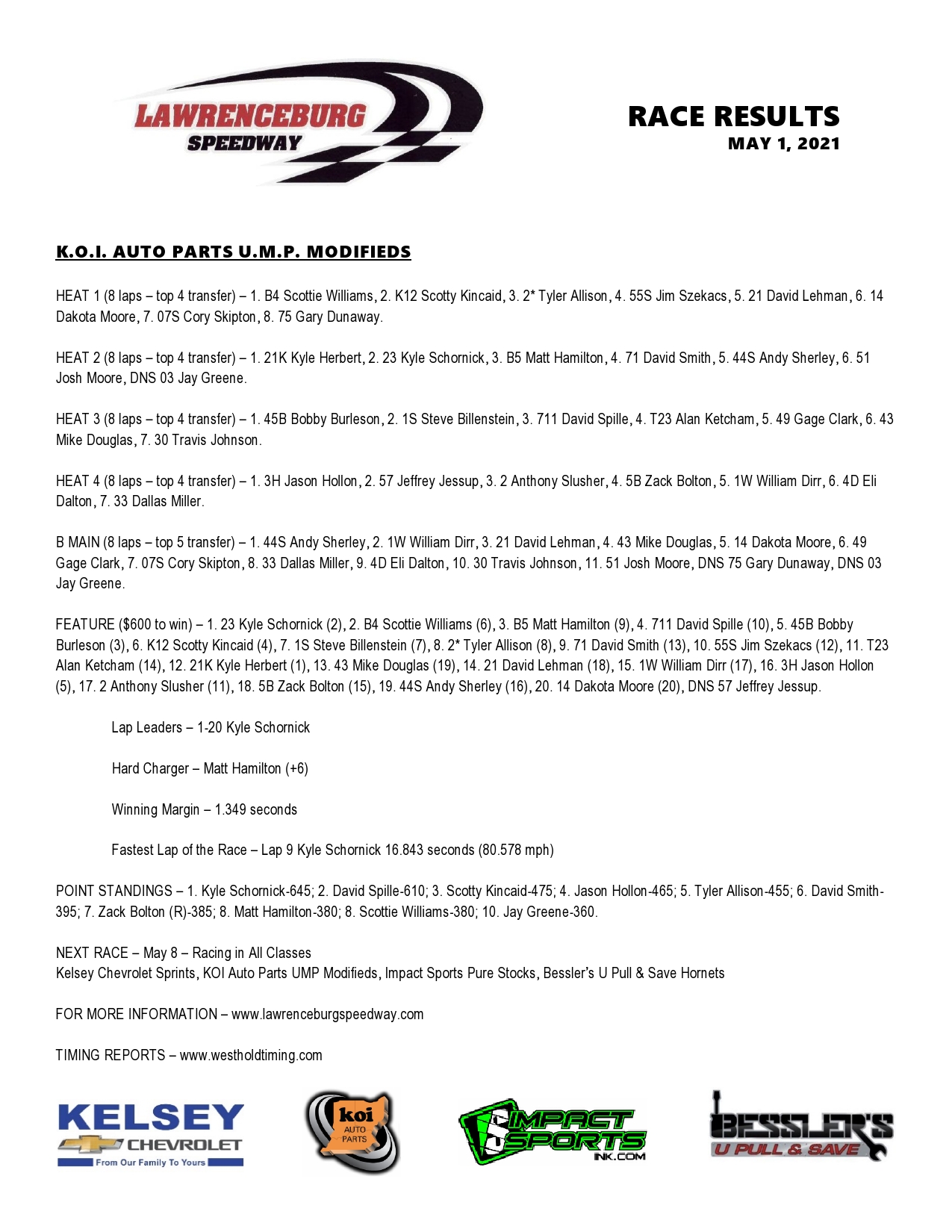 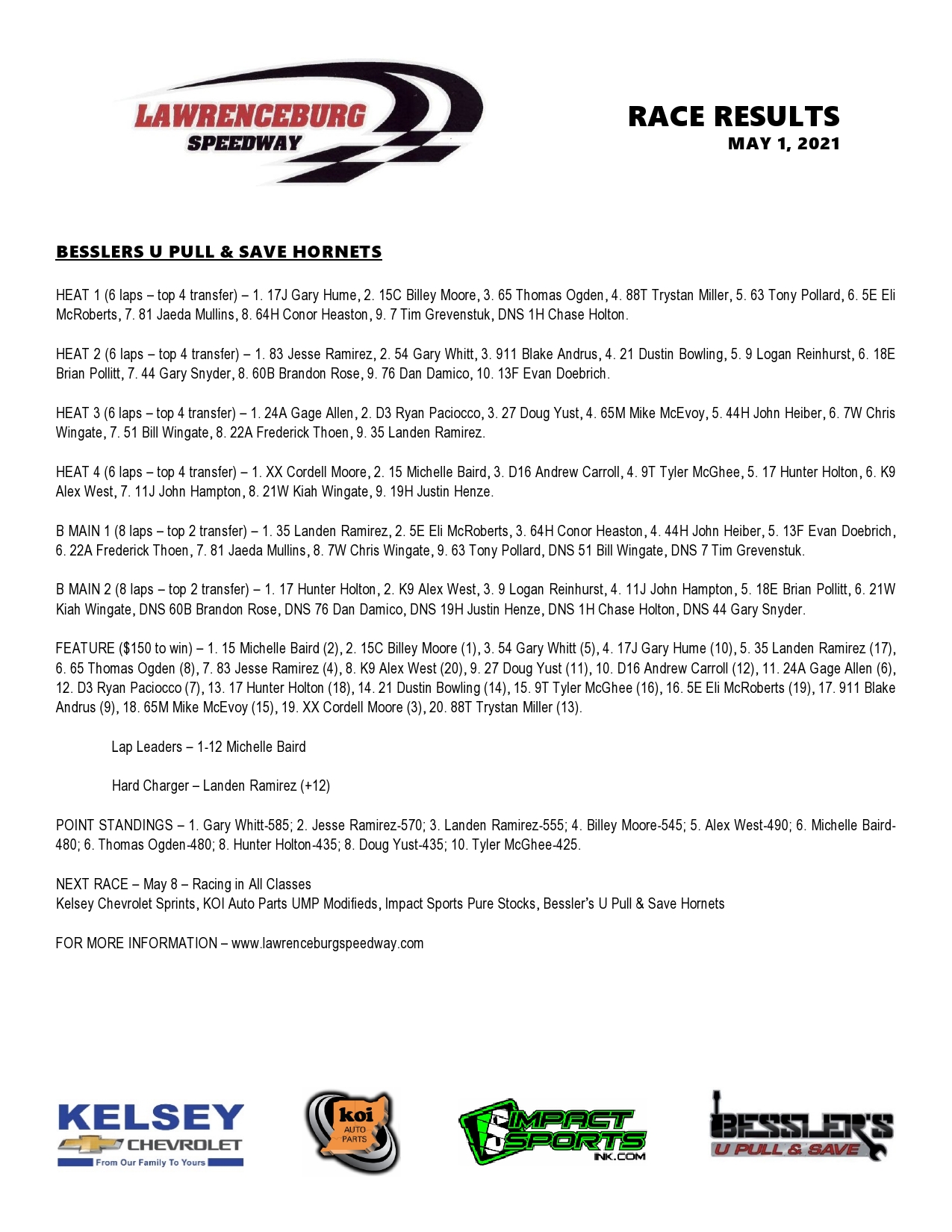 Will McRoberts dominated on his way to picking up his second feature win a row at Lawrenceburg and adding to his all time wins total.  Back to back and defending series champ, Joel Andrews could not even challenge McRoberts, and finished the race second followed by Will Hayes, James Ackman and Corebin McRoberts.  Heat race winners were McRoberts, and John Heaston.  The Impact Sports return to the track on Saturday, May 8th, 2021.