The 2020 Lawrenceburg Speedway, Kelsey Chevrolet Sprint Car Track Champion, Nick Bilbee picked up the feature win this past Saturday night in a thrilling 25 lap feature race.  Tyler Kendall took the lead on the opening lap and appeared to be on his way to his first career win at Lawrenceburg.  Bilbee was able to make the move on Kendall on lap 12 to take the lead.  Kendall would not give up, grabbing the lead back on lap 18 only to have Bilbee retake the lead for good on lap 24.  Kendall held on to second, followed by Garrett Abrams, Korbyn Hayslett, and JJ Hughes.  Heat race winners were Kendall, Bilbee, and Moffatt.  The Kelsey Chevorlet Sprint Cars return to the track on Saturday April 24th.

Defending KOI Auto Parts Track Champion, David Spille returned to victory lane Saturday night picking up the feature win.  The win put him back in victory lane for the first time in over a year.  Dallas Miller took the lead on the opening lap and was cruising until a flat left rear ended his chance at winning his first career modified feature.  This turned the lead over to David Spille who led until lap 12 when Pete Holt took the lead.  Holt looked like the car to beat.  Long time veteran Scotty Kincaid flipped in turn 2 which brought out the red flag.  Kincaid was not hurt in the incident but during the red flag, Holt took his car off the track with an apparent mechanical issue.  This turned the lead back over to Spille who had to fend off challenges from Daniel Sanchez and Kyle Schornick but Spille was able to do just that.  Sanchez finished second followed by Schornick, Daniel Dehner, and Scottie Williams.  Heat race winners were David Spille, Matt Hamilton, and Pete Holt.  Scottie Williams won the B main.  The KOI Modifieds return to the track on Saturday April 24th.

Gary Hume won the Besslers U Pull N Save Hornet Feature on Saturday night in what was an exciting race where any one of four different drivers could have taken the checkered flag.  Gary Whitt took the lead early on and looked like he would lead all 12 laps.  As the race laps waned, Gary Hume, Thomas Ogden, and Landen Ramirez all had their cars up front and battling for the win.  Coming to the white flag, Gary Hume was able to get to the outside of Whitt and make the pass for the lead and the eventual win.  Whitt finished second followed by Ramirez, Ogden and Jesse Ramirez.  Heat race winners were Trystan Miller, Landen Ramirez, and Gary Whitt.  Tony Pollard won the B main.  The Besslers U Pull N Save Hornets return to the track on Saturday April 24th.

Will McRoberts, the all-time winningest driver in the Impact Sports Purestocks picked up another feature win on opening night the Purestocks.  McRoberts led all 15 laps on his way to the victory.  The rest of the top 5 was Joel Andrews, John Heaston, James Ackman, and Danny Eichler.  Heat race winners were Heaston, Corebin McRoberts, and Will McRoberts.  The Impact Sports Purestocks return to Lawrenceburg on Saturday April 24th. 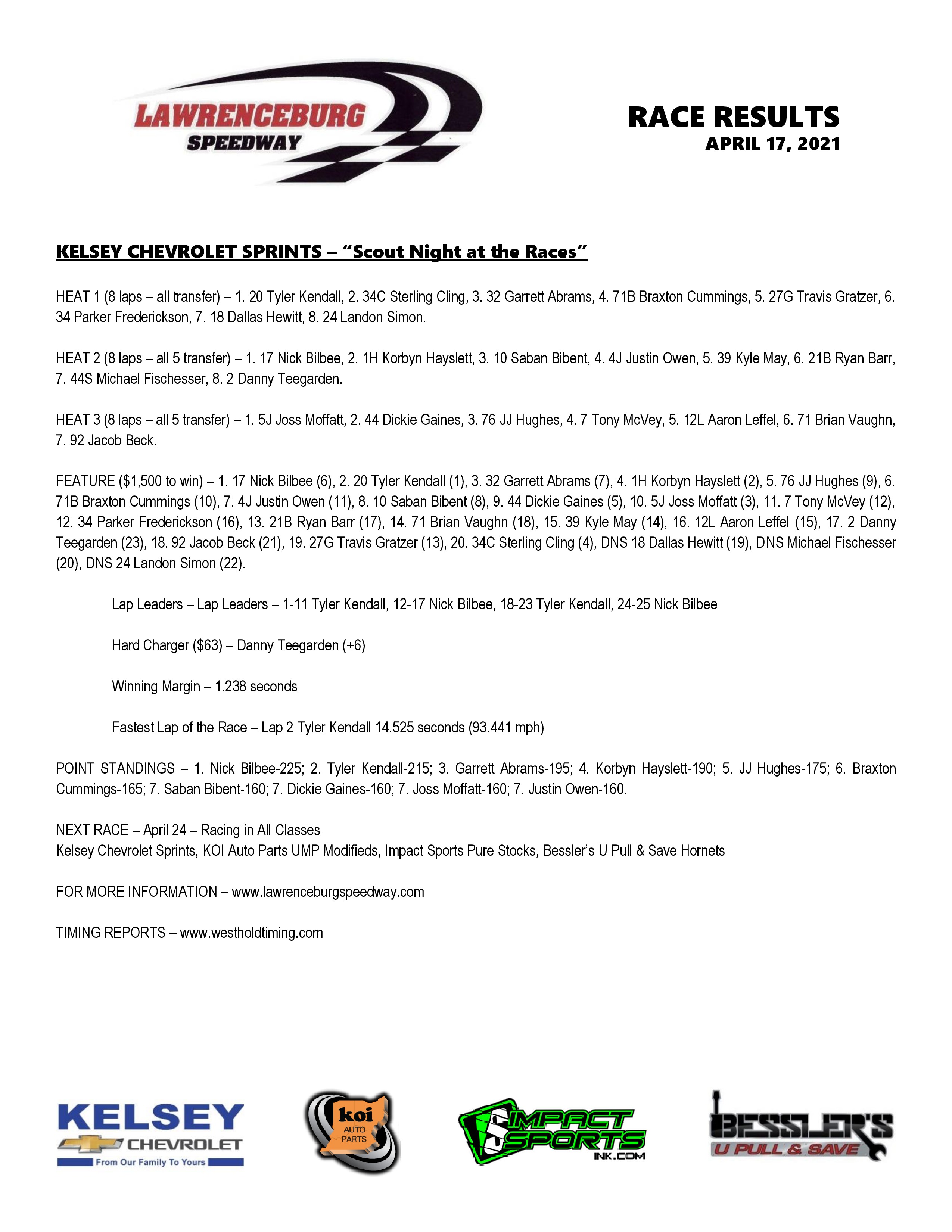 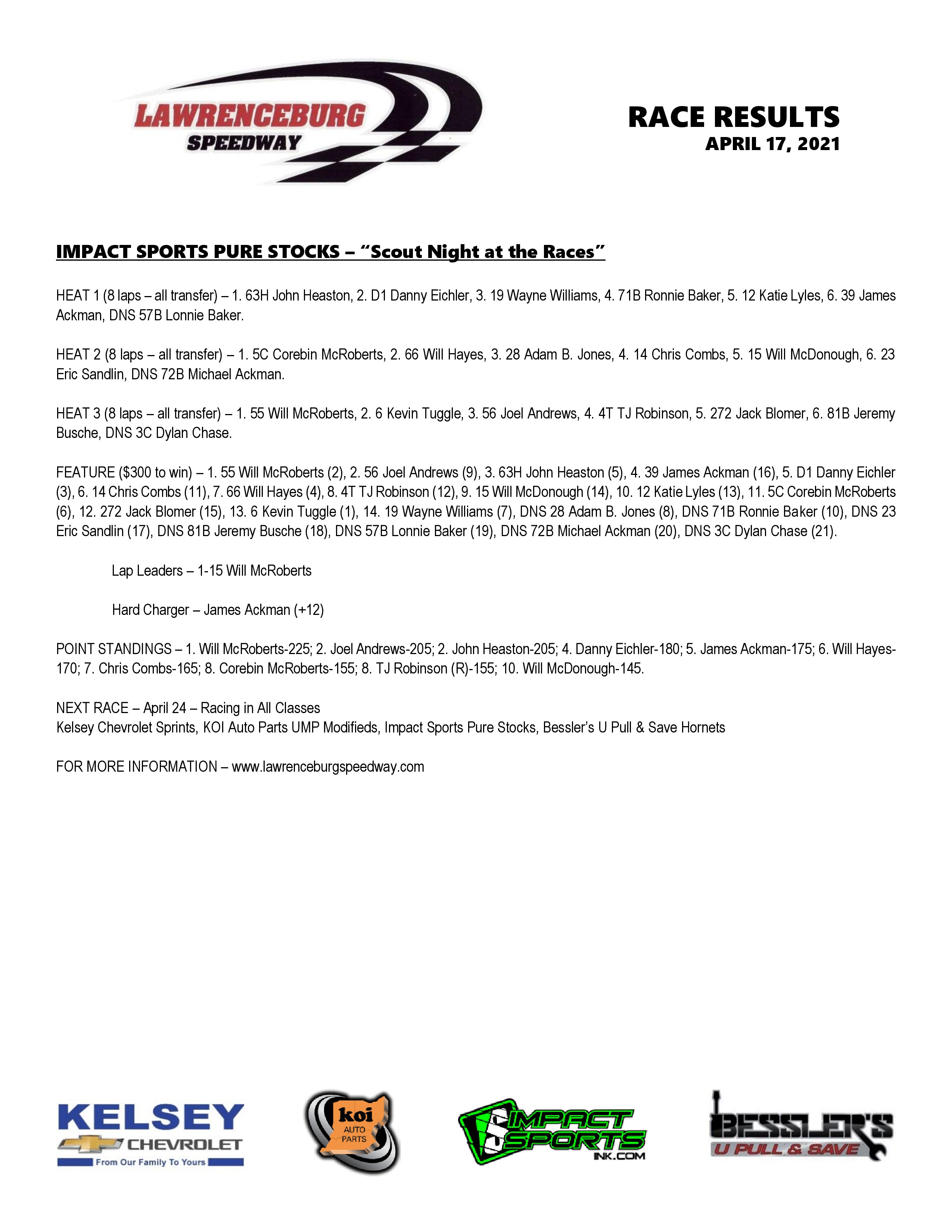 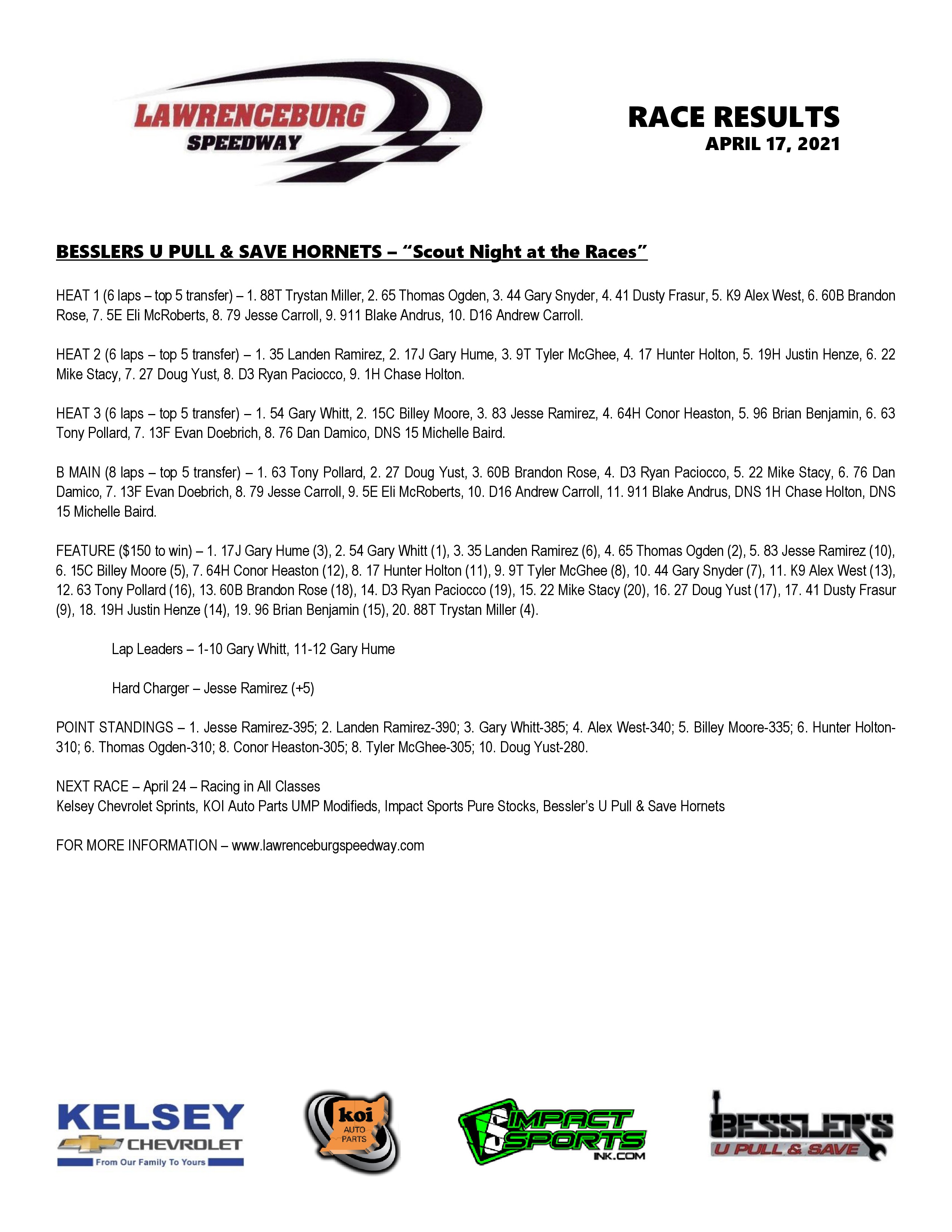