California native Max Adams has only raced at Lawrenceburg a handful of times.  But in those handful of times, he has good finishes including a pair of runner up finishes coming into the final points night of 2020 season for the Kelsey Chevrolet Sprint Cars.  Adams would lead all 25 laps to pick up his first career win at Lawrenceburg.  He was never challenged for the top spot even as he raced through slower traffic.  Scotty Weir finished second followed by Garrett Abrams, Korbyn Hayslett, and JJ Hughes.  Heat race winners were Hayslett and Weir.  Nick Bilbee was credited with winning the B- Main.  Bilbee who had already clenched the 2020 Kelsey Chevrolet Sprint Car Track Championship was officially crowned champion following the feature.  The 2020 Rookie of the year battle was won by 15-year-old Saban Bibent after coming into the night tied with fellow rookie Ryan Barr.  That wraps up the abbreviated Kelsey Chevrolet Sprint car season for 2020.

Kyle Schornick ended up third in the final modified point standings.  If he hadn’t missed a couple races, he very well may have been the champ.  But as it turned out, he has won multiple races in the shortened season and has a lot to look forward to entering the 2021 season.  Dallas Miller started on the outside of the front row and jumped to the lead on the opening lap and was cruising even pulling away from the field including Schornick.  Miller led the first 4 laps until something mechanical caused him to hit the wall ending his chances at a win.  That turned the lead over to Schornick who led the remaining laps to win the feature.  On the same lap Miller had trouble, Matt Hamilton, the defending track champ and point leader coming in lost a drive shaft, his second of the night, ending his race, and ultimately ending his championship run.   David Spille by finishing second secured his second career Lawrenceburg Speedway Modified Track Championship.  Heat race winners were Jim Szekacs, Dallas Miller, and Kyle Schornick.

Defending Besslers U Pull N Save Track Champion, Gary Whitt won for the second time in 2020 while trying to defend his title.  Gage Clark would take the lead on the opening lap and hold it until Bobby Smith got around him on lap 4 and would lead until he got loose on a restart sliding high, allowing Gary Whitt to pass him for the lead.  Whitt would lead the final 3 laps on his way to the feature win.  Smith finished second followed by Cordell Moore, Alex West, and Gage Clark.  Heat race winners were Smith, Moore, Clark, and Landen Ramirez.  Cordell Moore secured his third Hornet Championship at Lawrenceburg.  He now is the all time wins leader, and has more championships than any other Hornet Driver.   Landen Ramirez is the Horney rookie of the year for 2020. 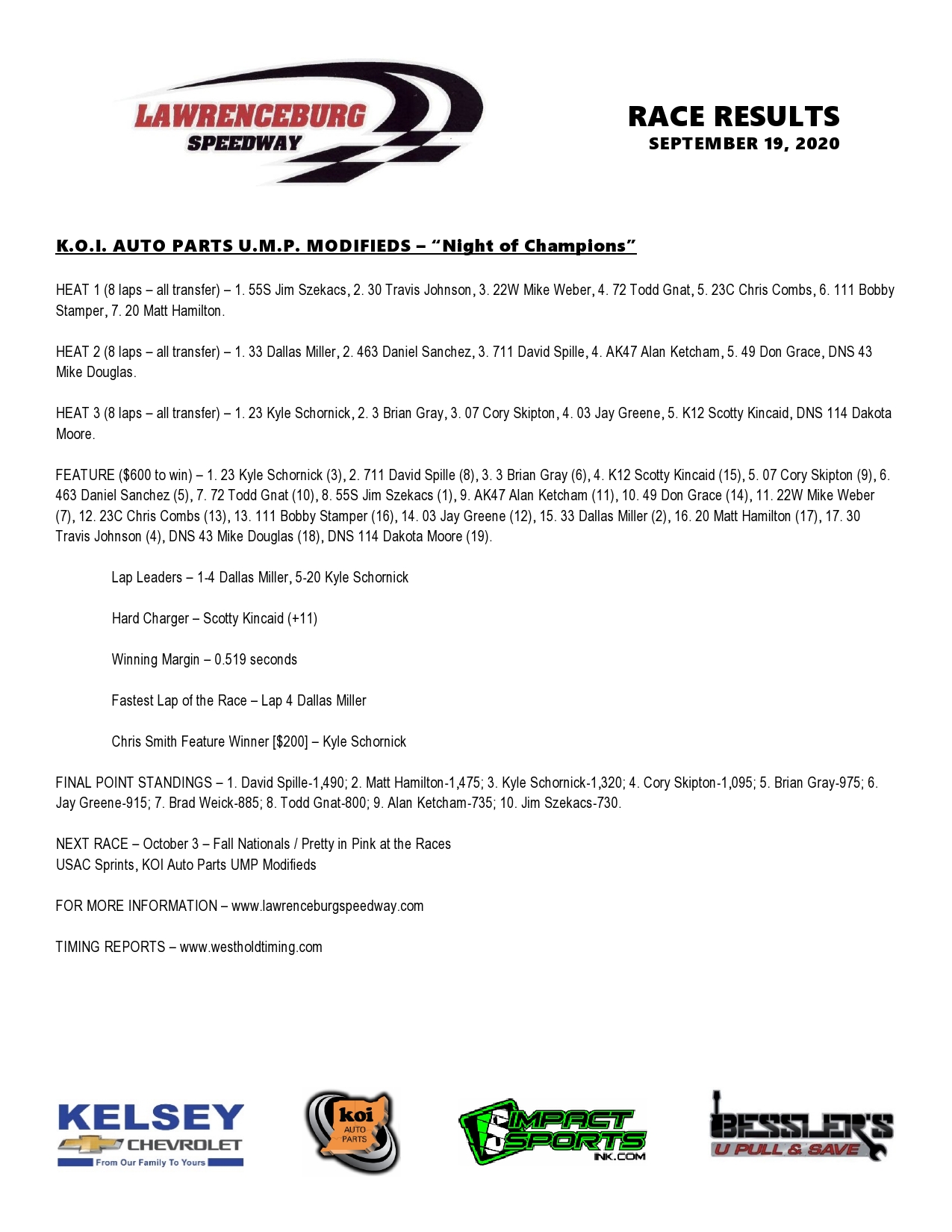 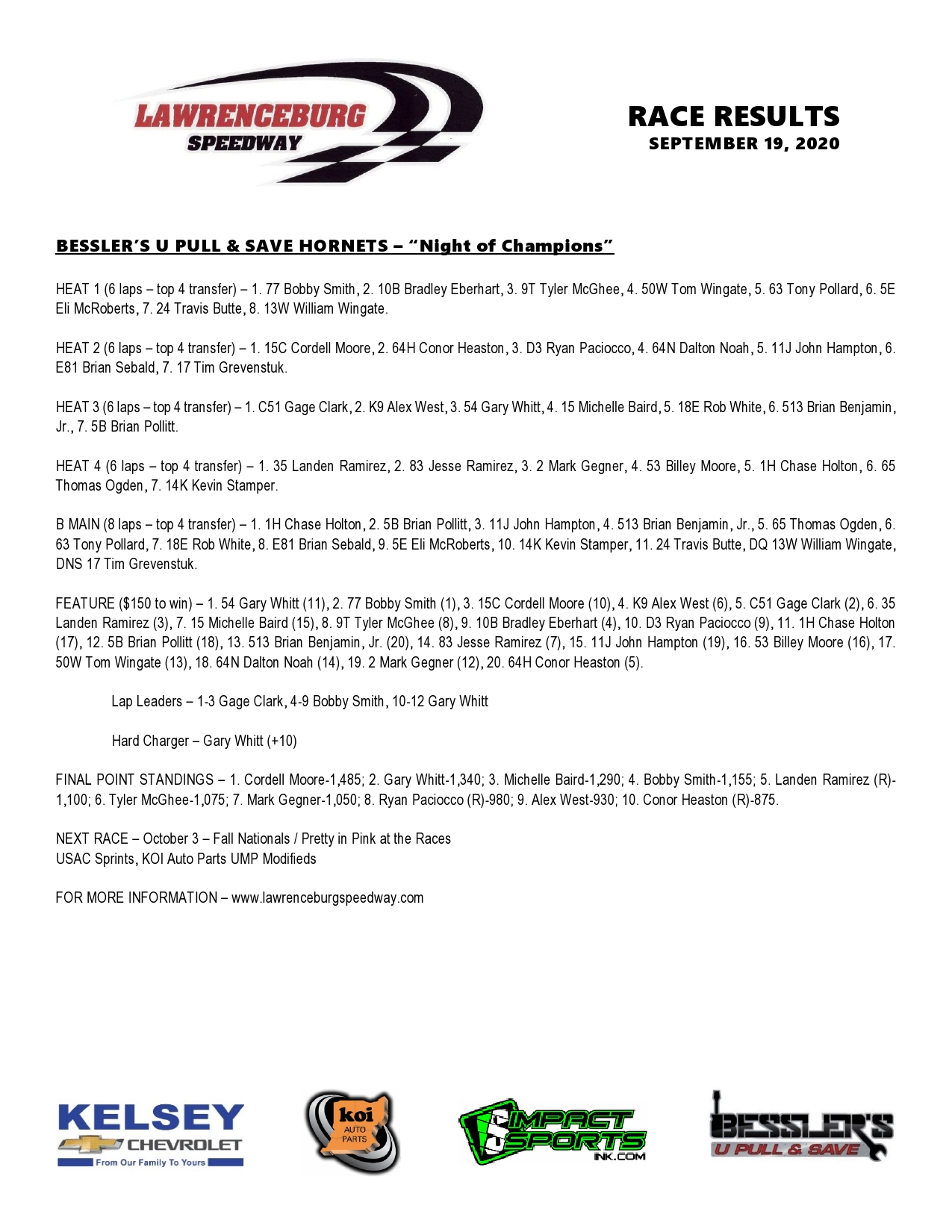 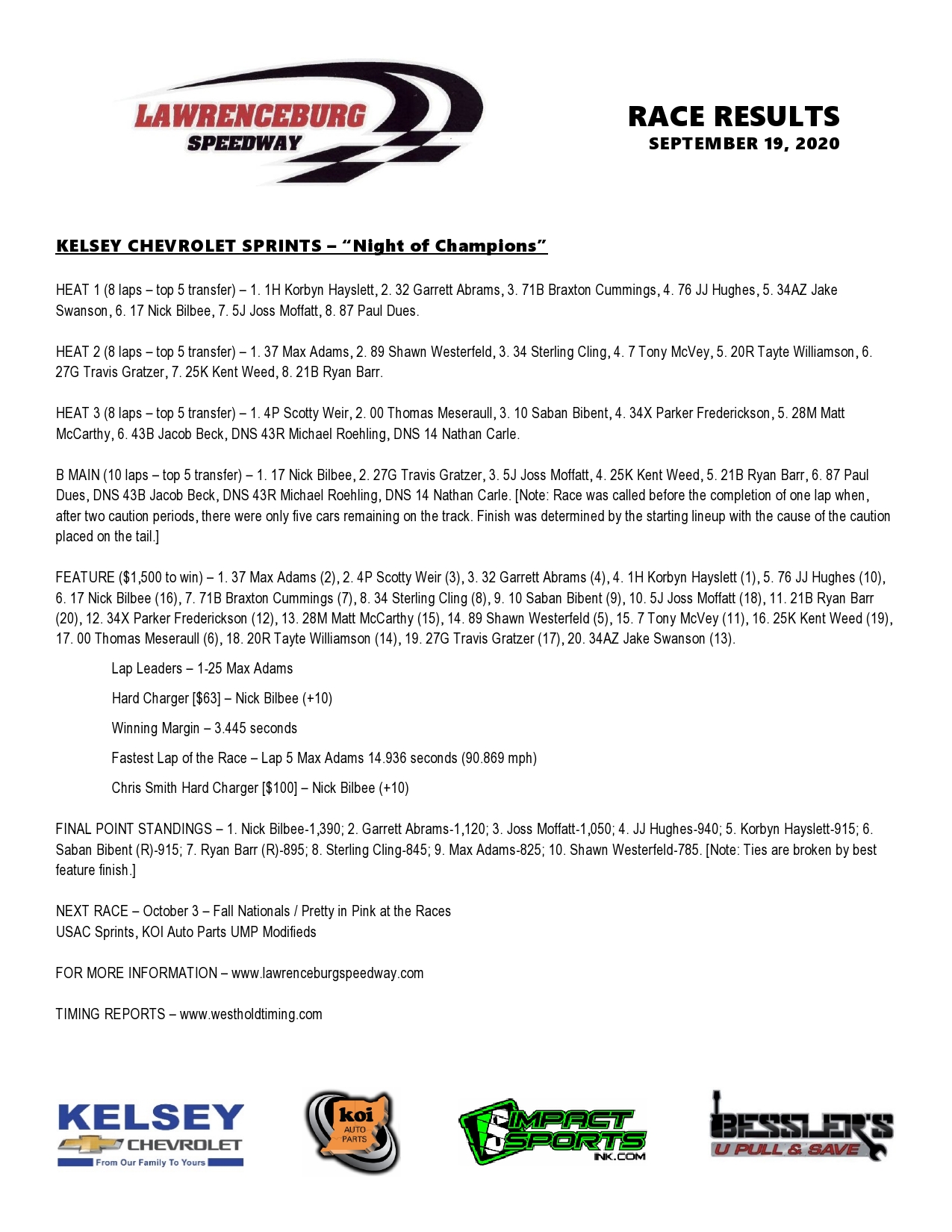