Kelsey Chevrolet Sprint Car Point leader Nick Bilbee led all 25 laps on his way to another sprint car feature win.  Bilbee dominated the feature with Joss Moffatt the only car close enough to contend.  After Moffatt, the rest of the top 5 was Sterling Cling, Korbyn Hayslett and Justin Owen.  Heat race winners were Moffatt and Bilbee.  With this win, Billbee unofficially has claimed the 2020 Kelsey Chevrolet Sprint Car Track Championship.  Going into the last points race, Billbee has a 290-point lead over Garrett Abrams.  The Kelsey Chevrolet Sprint Cars return to the track on September 19th for The Night of Champions where we will crown champions in each class.

Trent Green won for the second time in 2020 and led all 20 laps on his way to the win.  For the second week In a row David Spille finished second.  He kept Green in sight through the races closing laps but was never close enough to mount a significant challenge.  The rest of the top 5 was Kyle Herbert, Matt Hamilton and Cory Skipton.  Heat race winners were Billy Vaughn, Trent Green, Bobby Boone, and David Spille.  B-Main winners were Todd Gnat and Jason Whitaker.  Matt Hamilton continues to lead the KOI Auto Parts Modifieds point standings with 1 race remaining.  Hamilton is looking to claim his second track championship in a row and third championship overall.

Cordell Moore won the feature again leading all 12 laps to increase his points lead and show his dominance in the Besslers U Pull N Save Hornet class.  He’s already a two-time champ and looking for his third championship this year.  Connor Heaston finished second followed by Bobby Smith, Michelle Baird and Gary Whitt.  Heat race winners were Heaston, Moore, Smith, and Bradley Eberhart.  B-main winners were Mark Gegner and Tyler McGhee.  One race remains for the Besslers U Pull N Save Hornets coming up on September 19th for The Night of Champions.

Kramer Wins Feature… In a Purestock!

Joey Kramer decided to come out of semi-retirement to run a purestock he built that is owned by someone else.  He had just finished rebuilding the car from a previous wreck.  Kramer started on the pole and led all 15 laps on his way to his first career Purestock win.  He is the all-time winningest driver at Lawrenceburg across all divisions, picking up all of his feature wins in a modified leading up to this win in a purestock.   The rest of the top 5 was defending track champion, Joel Andrews, Wayne Williams, Will McDonough, and Will Hayes.  Heat race winners were Kramer and Andrews.  One race remains in the chase for the championship with Joel Andrews looking to win his second championship in a row at Lawrenceburg. 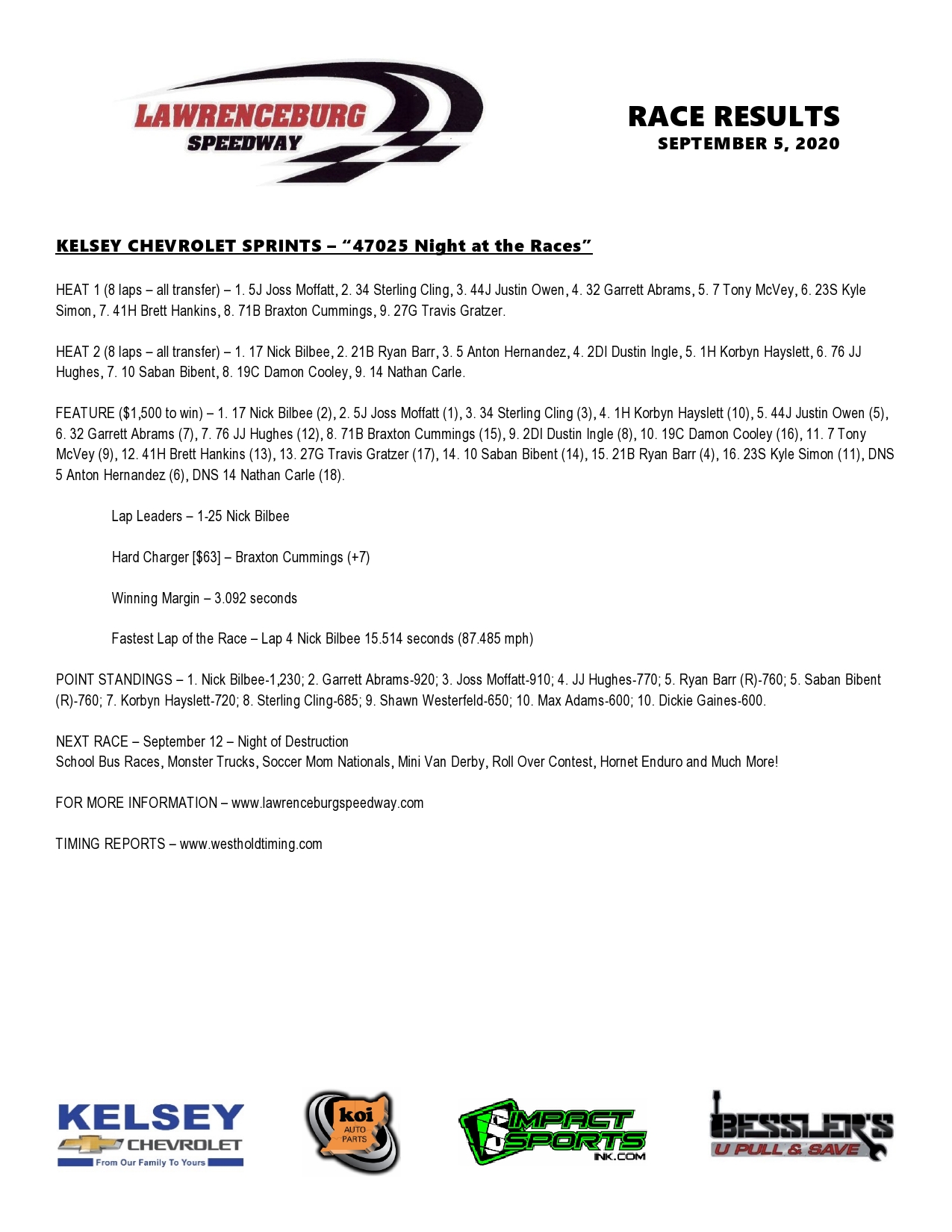 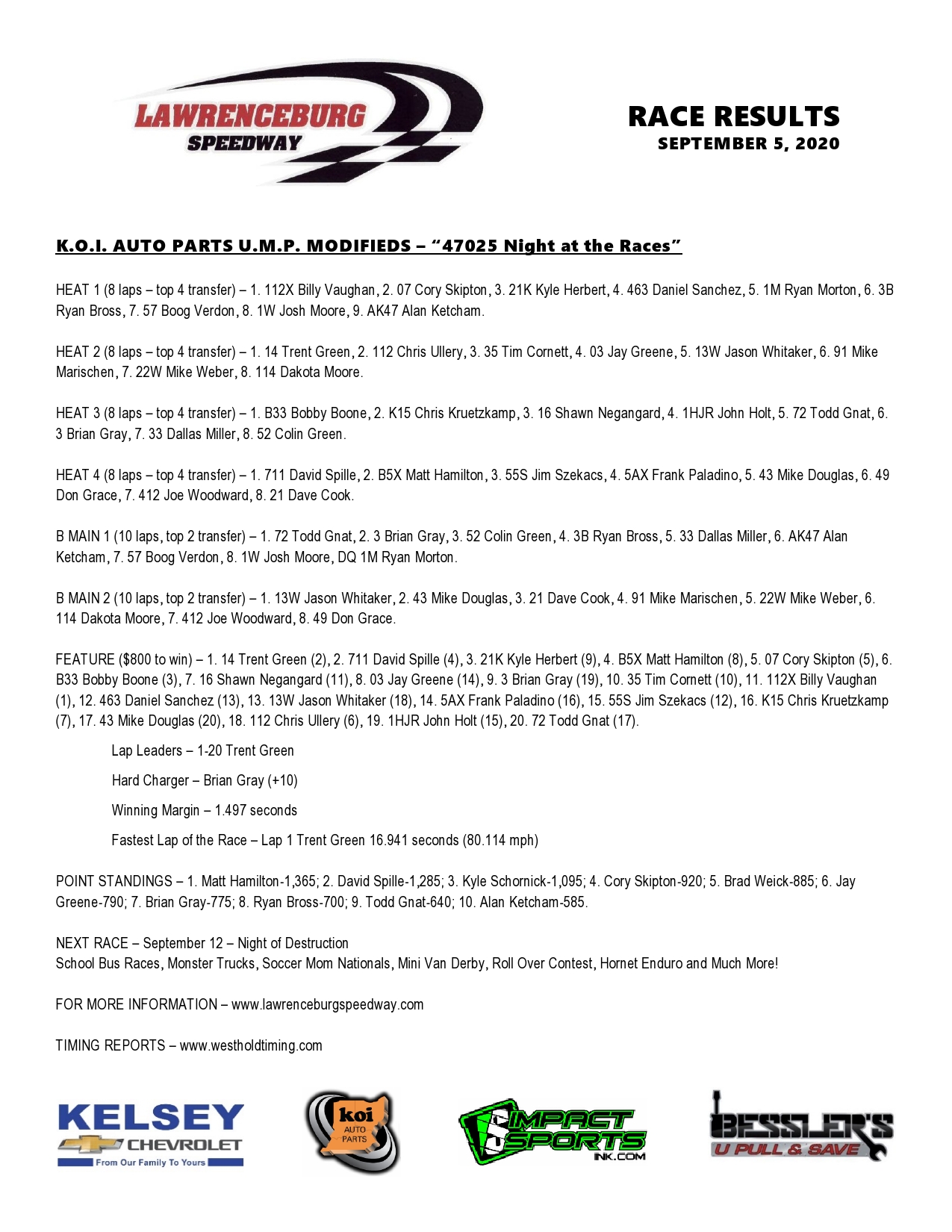 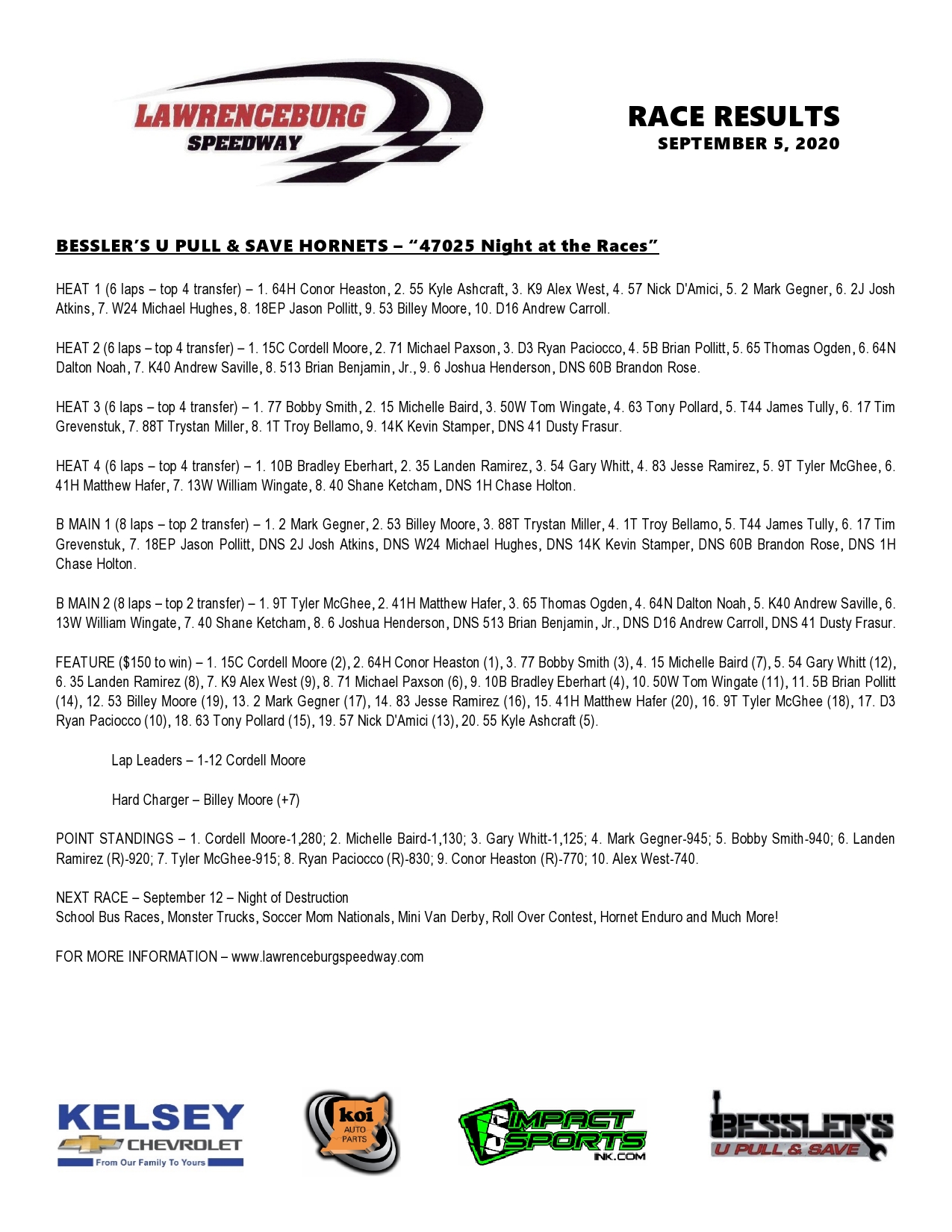