Nick Bilbee has been the driver to beat in the Kelsey Chevrolet Sprint car class At Lawrenceburg Speedway in 2020.  He picked up his second win of the year this past Saturday night while increasing his point lead on the rest of the field.  Bilbee started on the outside second row and quickly worked his way to second following Dickie Gaines who led the first 5 laps of the feature in his first race back since crashing at Lincoln Park earlier this summer.  BIlbee took the lead away from Gaines, the defending champ and pulled away leading the remaining 20 laps.  Max Adams beat Landon Simon back to the checkered flag to grab second, Simon was third followed by Joss Moffatt and Cole Ketchum.  Heat race winners were Drew Abel, Landon Simon, Dickie Gaines, and Nick BIlbee.  Travis Hery won the B main.  Nick BIlbee is the points leader by 215 points over JJ Hughes.  The Kelsey Chevrolet Sprint cars return on August 22nd for the Dick Gaines Memorial.

Schornick started from the 3rd position and proved to be strong from the drop of the green flag.  Adam Stricker Started on the outside of the front row and took the lead on the outside and appeared to be the car to beat.  He ran the highside line which generally is the fastest way around the 3/8 mile Lawrenceburg Speedway.  Schornick made a move on the outside of Stricker but the caution came out before he could make the pass.  On the next restart, Stricker got a good jump on Schornick and pulled away from him for a couple laps.  Schornick was able to make up a lot of time through the middle of the turns and caught Stricker coming to the white flag.  He grabbed the lead from Stricker and beat him back to the checkered flag for his first win of 2020.  Stricker was second followed by Matt Hamilton, David Spille, and Brad Wieck.  Matt Hamilton leads the KOI Auto Parts Modifieds point standings by 20 over Kyle Schornick.  The Modifieds return to Lawrenceburg on August 22nd as a support class for the Dick Gaines Memorial.

Cordell Moore was in a backup car for the heat race which he won but something was amiss with the engine.  So he made the decision to drive his dad Billey’s car.  With the driver change, Cordell had to start from the tail.  He had no trouble working his way through the field and making his way to the front.  He made his way to second behind defending track champ Gary Whitt who looked like he would cruise to the easy win.  With just a couple laps remaining Whitt would break an axle ending his chances at a victory.  With Whitt out, Moore cruised to the easy win.  Mark Gegner finished second followed by Andy Anderson, Brian Henderson, Jr. and Brian Henderson, Sr.  Heat race winners were Jesse Ramirez, Gary Whitt, Mark Gegner, Cordell Moore, and Landen Ramirez.  B Main winners were Michelle Baird and Chase Holton.  Moore leads Michelle Baird by 155 points in Besslers U Pull N Save Hornets.  They return to the track on August 22nd.

In his first time out in 2020, Mike Ackman led all 15 laps in picking up his first win of the year.  Ackman leading all 15 laps wasn’t without excitement, however.  Defending track champ, Joel Andrews made his way to second behind Ackman and was waiting for a chance to make a move.  On the white flag lap, Ackman went low and Andrews made a run on the outside pulling alongside Ackman in turns 1 and 2.  Ackman drifted high pushing Andrews toward the wall.  As the leaders exited turn 2 Andrews made contact with the right rear of Ackman causing Ackman to get sideways but without hitting anything.  Andrews hit the backstretch wall hard, and Eric House running 4th at the time was collected in the incident which had nothing to do with him.  House’s car was destroyed while Andrews was able to continue but he had to restart from the tail.  Ackman never stopped so on the restart he restarted as the leader where he led the last lap picking up the feature win.  Will Hayes finished second followed by CJ Redd, Joel Andrews, and Ronnie Baker.  Heat race winners were Wayne Williams, and Mike Ackman.  Andrews leads the points by 45 over Will Hayes.  The Impact Sports Purestocks return to the track on August 22nd. 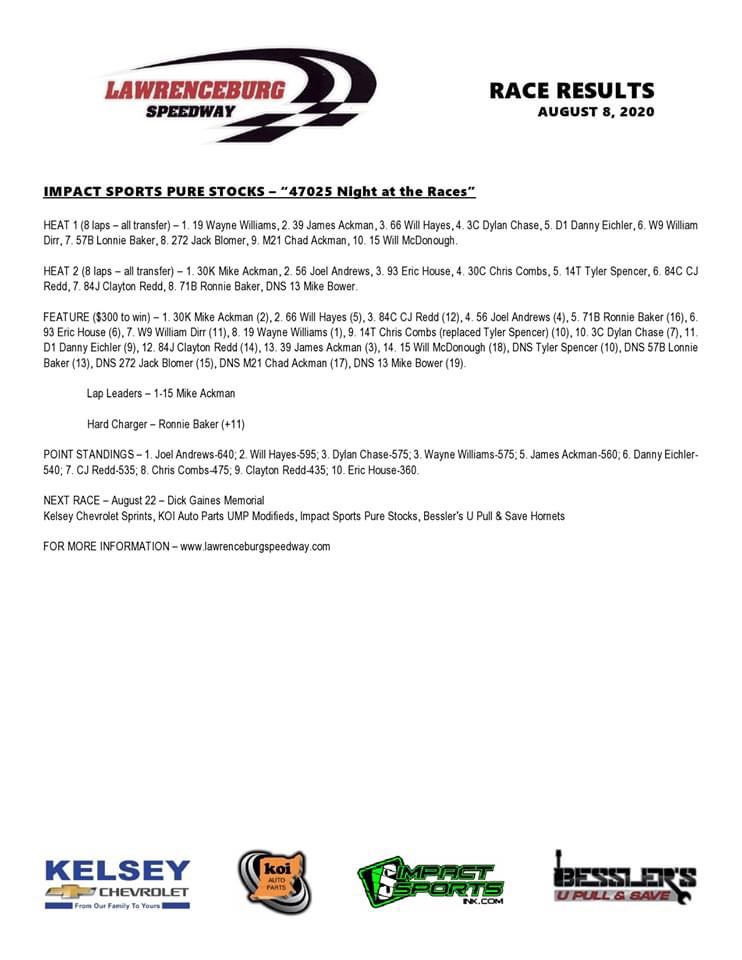 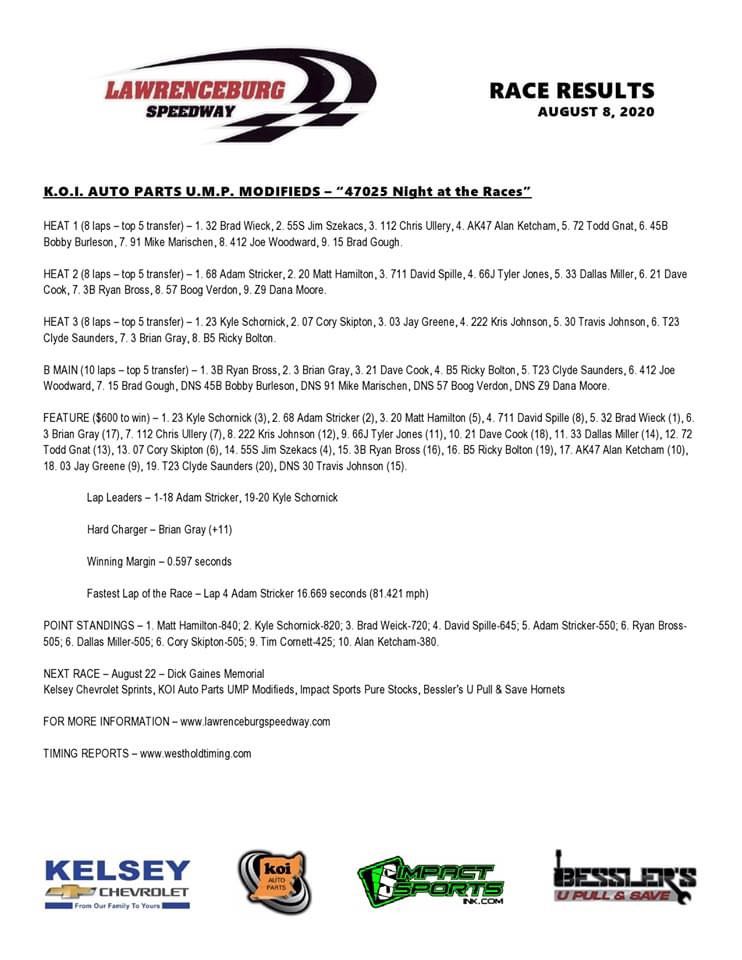 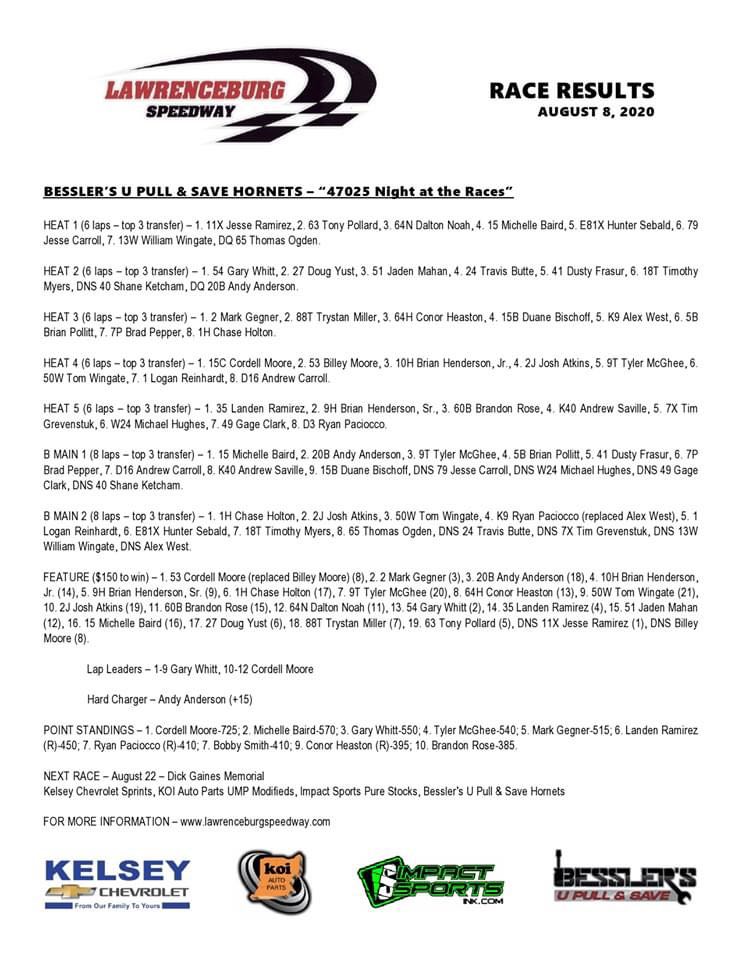