Texas native Anton Hernandez dazzled the crowd with his big slide jobs making his way to the front on his way to his first 410 non-wing sprint car feature win.  Nick Bilbee took the lead on the opening lap and appeared to have the race under control as he led the first 23 laps of the 25-lap race.  Behind him, Anton Hernandez was working his way to the front by throwing massive slide jobs on the front runners.  He got around Garrett Abrams for second before setting his sights on Bilbee, the race leader.  Coming to the white flag Hernandez went low on BIlbee and slide up in front of the 17 Sprint Car grabbing the lead away and holding on for his first win in 410 non wing sprint car and at Lawrenceburg Speedway.  BIlbee finished second followed by Garrett Abrams, Garrett Aitken, and Korbyn Hayslett.  Heat race winners were Aitken, BIlbee, and Joss Moffatt.  22 Kelsey Chevrolet Sprint Cars were on hand competing for the chance to win.

One of the winningest drivers in the history of Lawrenceburg Speedway in a modified is Brad Wieck.  Many of those wins came back when the speedway was a quarter mile bullring shaped, but he has mastered the high-banked 3/8 mile oval as well.  On Saturday night, he did just that.  Tim Cornett started from the pole and led the first lap before Matt Hamilton took command on lap 2.  It appeared Hamilton would have no trouble picking up his second feature win of the year, but with a handful of laps remaining, something on the left front of Hamilton’s car broke.  Making the car hard to control.  This allowed Wieck to take the lead from Hamilton on the high side.  Wieck went on to win the feature with David Spille second.  Hamilton was able to hold to finish third followed by Scottie Williams and Kyle Schornick.  Heat race winners were Cornett, David Jamison, and Matt Hamilton.  Schornick won the B Main.  The KOI Auto Parts Modifieds return to the track on Sunday July 26th as the support class for USAC Indiana Sprint Week.

Cordell Moore won the previous Hornet feature so he could start no better than 10th.  He took the green flag and passed 6 cars after one lap.  He got the lead on lap 4 from defending track champ Gary Whitt and pulled away securing the victory and the second win of the year for Moore.  The rest of the top 5 was Whitt, Gary Hume, Michelle Baird, and Conor Heaston.  Heat race winners were Hume, Baird, Whitt, and Moore.  B Main winners were Travis Butte, and Bobby Smith.  36 Besslers U Pull N Save Hornets were competing at the track and they return to the Lawrenceburg Speedway on Saturday August 1st for the Hornet Enduro during the Night of Destruction.

Christopher Combs had finished second to his dad Chris, on a couple different occasions but had not yet been able to put his car into victory lane.  Combs had shown that he was one of the best Purestocks all night, and he showed how fast he was during the 15 lap Impact Sports Purestock Feature.  Series champ, Joel Andrews led the first 3 laps before spinning out as the caution flag came out forcing him to restart at the tail.  James Ackman came in as the series point leader and looked to be on his way to picking up his first career feature win, but Christopher Combs had something to say about that!  Combs was using the high side to keep his momentum wound up and allow him to get massive runs off the turns.  This eventually would payoff for Combs who took the lead on lap 12 and led the final 3 laps on his way to the victory.  Dylan Chase finished second followed by Danny Eichler, Joel Andrews, and Will Hayes.  Heat race winners were Andrews, and Chase.  The Impact Sports Purestocks return to the track on Saturday August 8th. 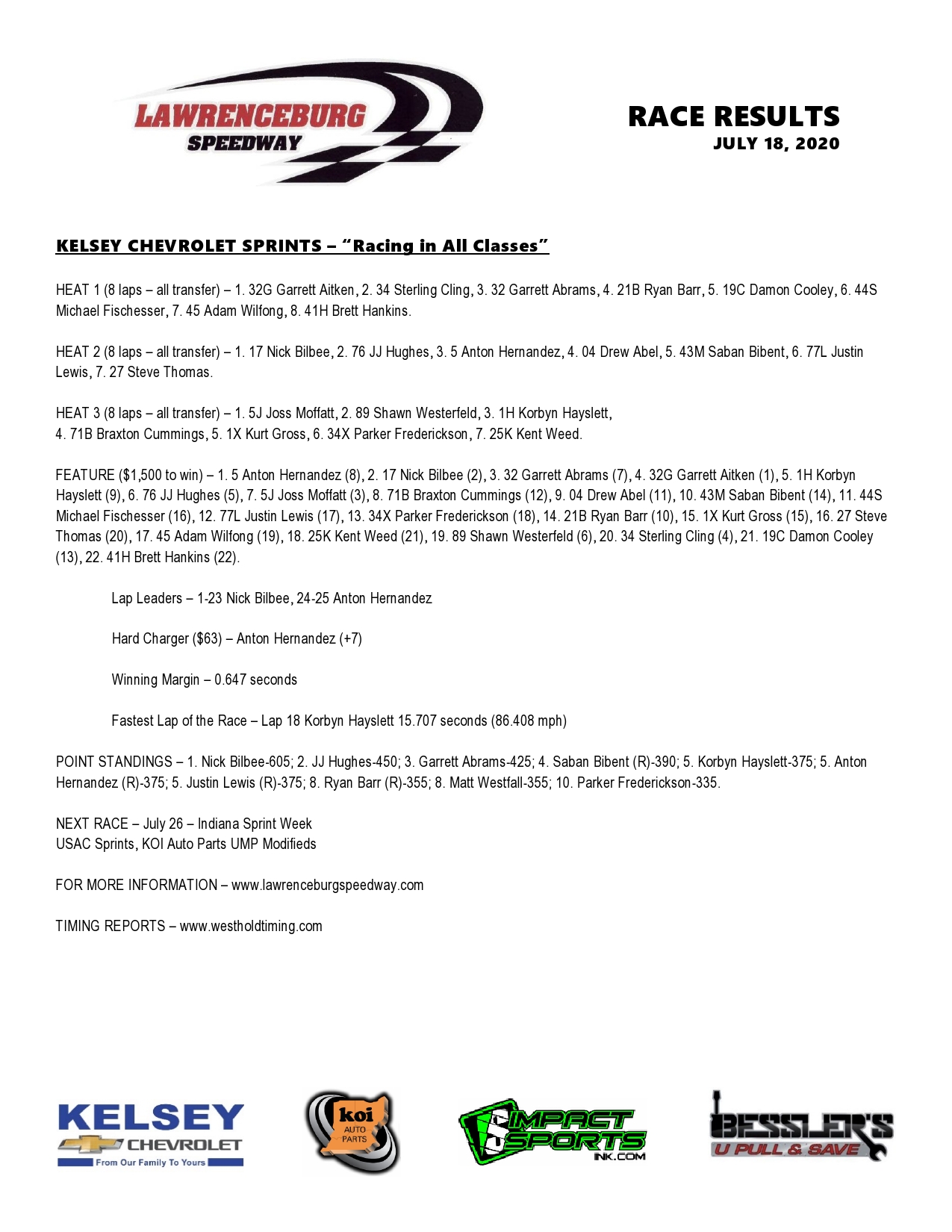 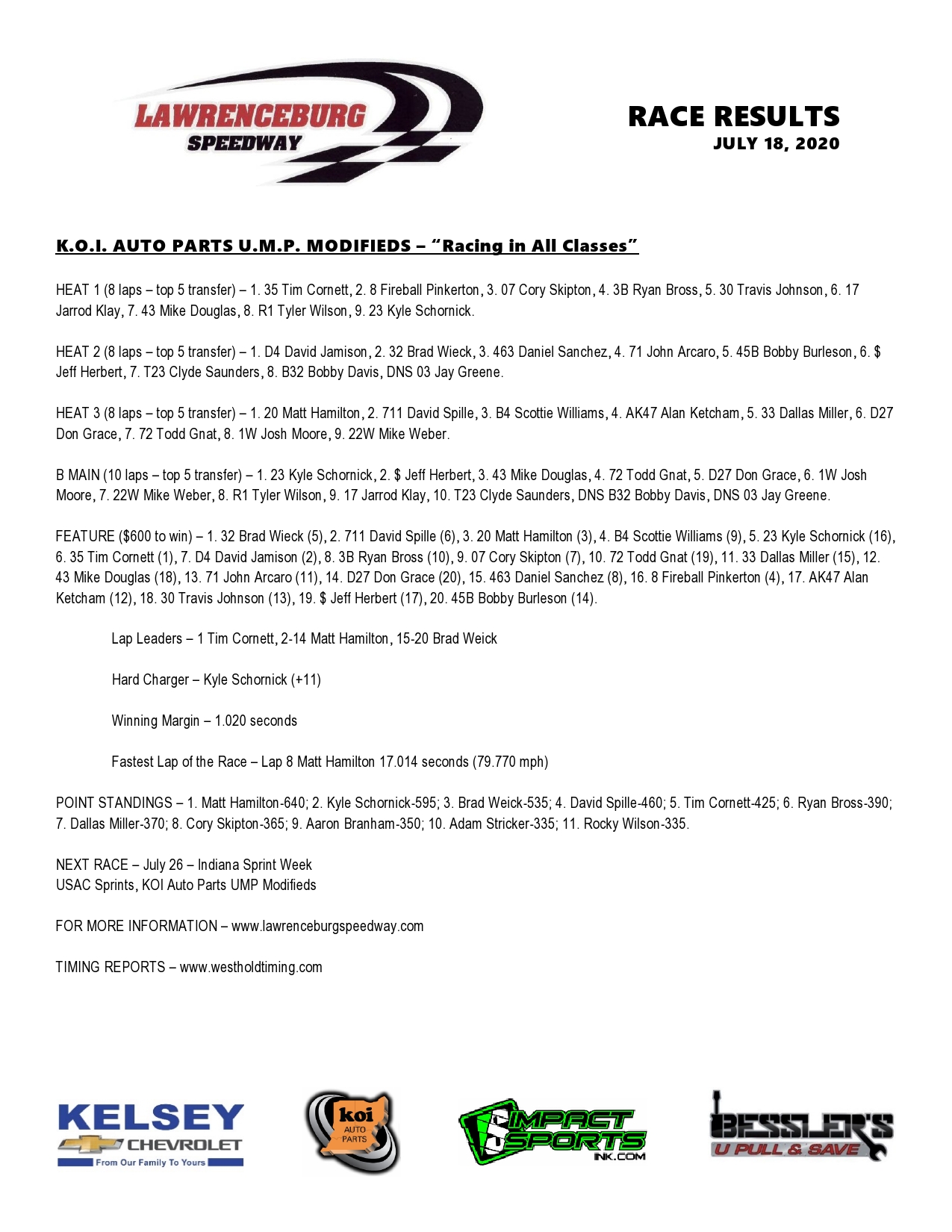 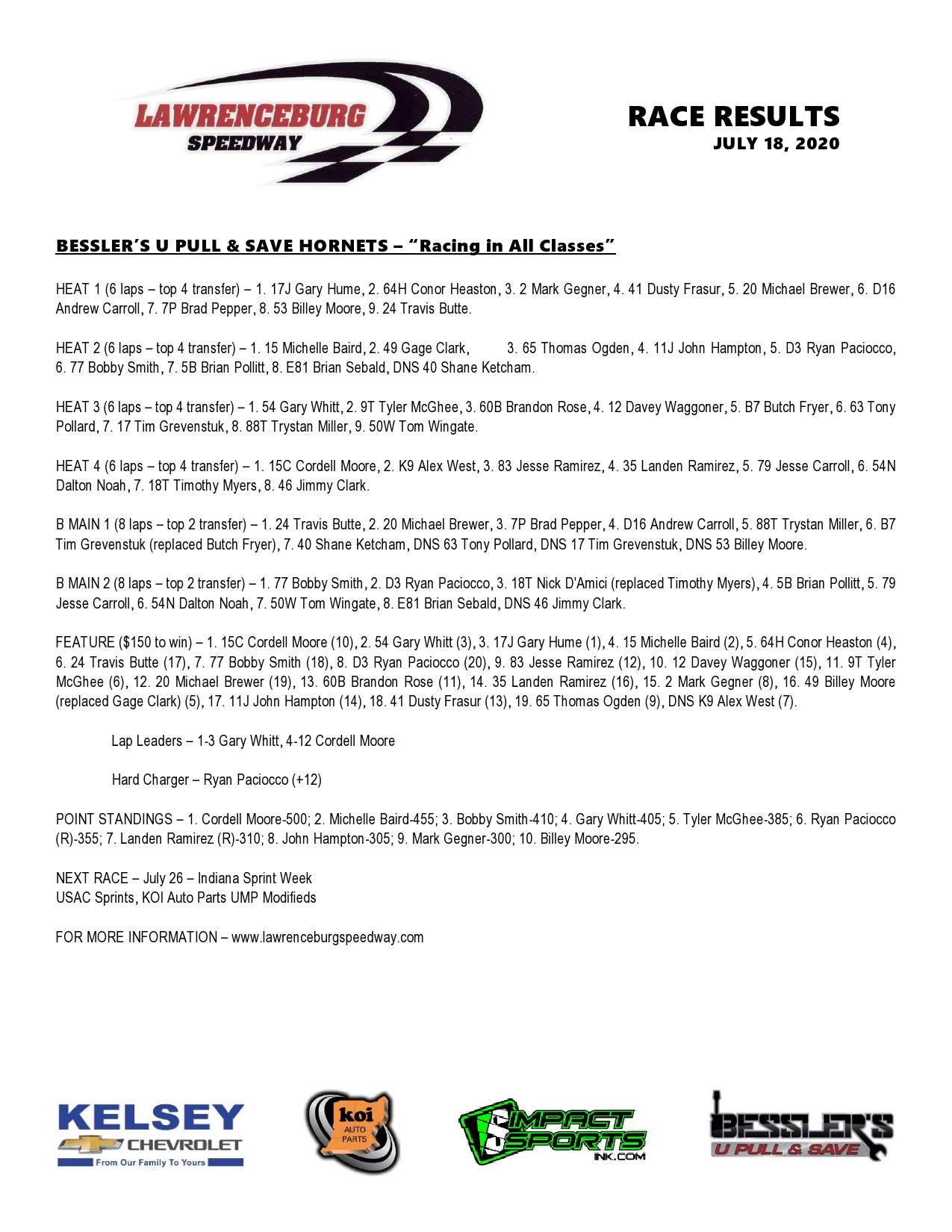