Verona, Kentucky’s Josh Rice is no stranger to victory lane.  At Lawrenceburg, a track he races at only occasionally, he has won in both modifieds and late models at the 3/8-mile-high banked oval.  On Saturday night he would win for the second year in a row at Lawrenceburg in a non-sanctioned late model race in support of the Merrill Downey Memorial Modified Race.  The green flag would wave with Derek Fisher on pole who quickly grabbed the lead from James Rice.  Fisher and James Rice raced side by side for several laps trading the lead.  Josh Rice was running the high side behind Fisher trying to find a way around both his brother James and Fisher.  When Fisher and Josh Rice inched ahead of James Rice, Josh knew it was time to make his move.  Josh Rice threw big time slide job to the inside of Fisher going into turn one and grabbed the lead.    He took the lead on lap 16 and lead the final 5 laps on his way to his second Late Model win at Lawrenceburg.  James Rice Finished second followed by Derek Fisher, Austyn Mills and Dustin Nobbe.

Mooresville, North Carolina’s David Stremme won the Merrill Downey for the second year in a row after starting from the outside of the second row.  The night started with 69 KOI Auto Parts Modifieds signed into the pits, each one competing for one of the coveted 24 starting spots in the 44- lap Merrill Downey Memorial.    The cars were separated into 3 groups for qualifying, heat races, and B-mains.  Fast times for the three groups were Tyler Nicely, Ricky Arms, and Victor Lee.  6 heat races where the top 3 finishers in each transferred directly to the Feature were up next after qualifying.  Tyler Nicely, a two-time winner of the Merrill Downey, easily won his heat with Cole Falloway winning heat 2, Will Krup winning heat 4, Kyle Schornick winning heat 5 and David Stemme winning heat 6.  The heat race winners were placed in a 6 car, 6 lap dash with the results determining the first 3 rows of the feature lineup.  Tyler Nicely won the dash and after the dash, discovered his water pump had broken the cooling fan and the radiator ending his chance at a third Merrill Downey crown.  He would not be able to make repairs to start the feature. Will Krupp took the lead from the outside of the front row and held it for 11 laps before Stremme made his move.  The two traded the lead with each other for the next couple laps before Stremme secured the top spot and started to pull away.  Kyle Schornick and Ron Davies both attempted to make a move on Stremme but Stremme proved to be the car to beat leading from lap 15 till the checkered flag on lap 44.  Ron Davies who had not raced in seven and a half years ran second followed by Peyton Harlow.  Ricky Arms and Kyle Schornick rounded out the top 5.  Stremme took home $5,764.44 in winnings for the night.  The KOI Auto Parts Modifieds return to the track on Saturday July 11th. 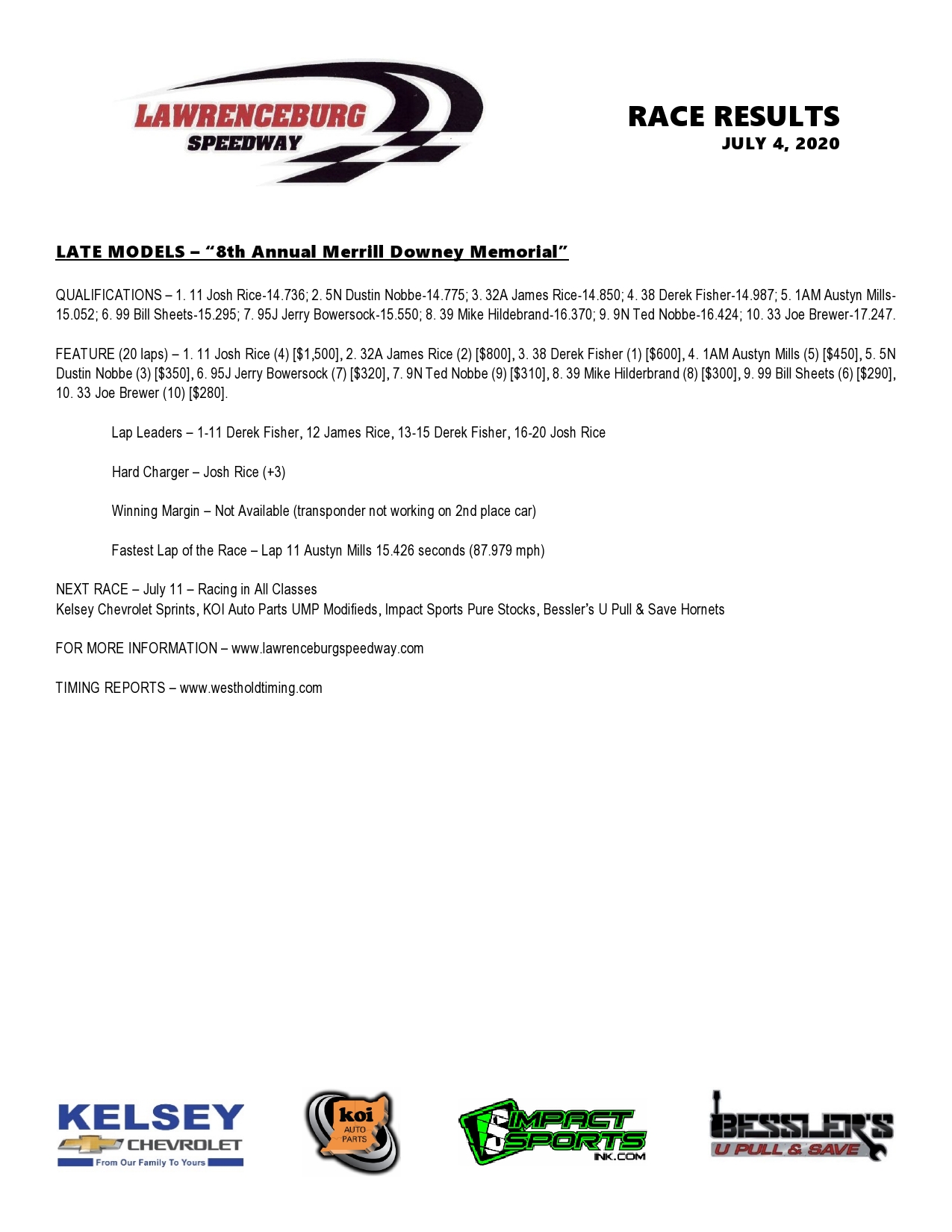 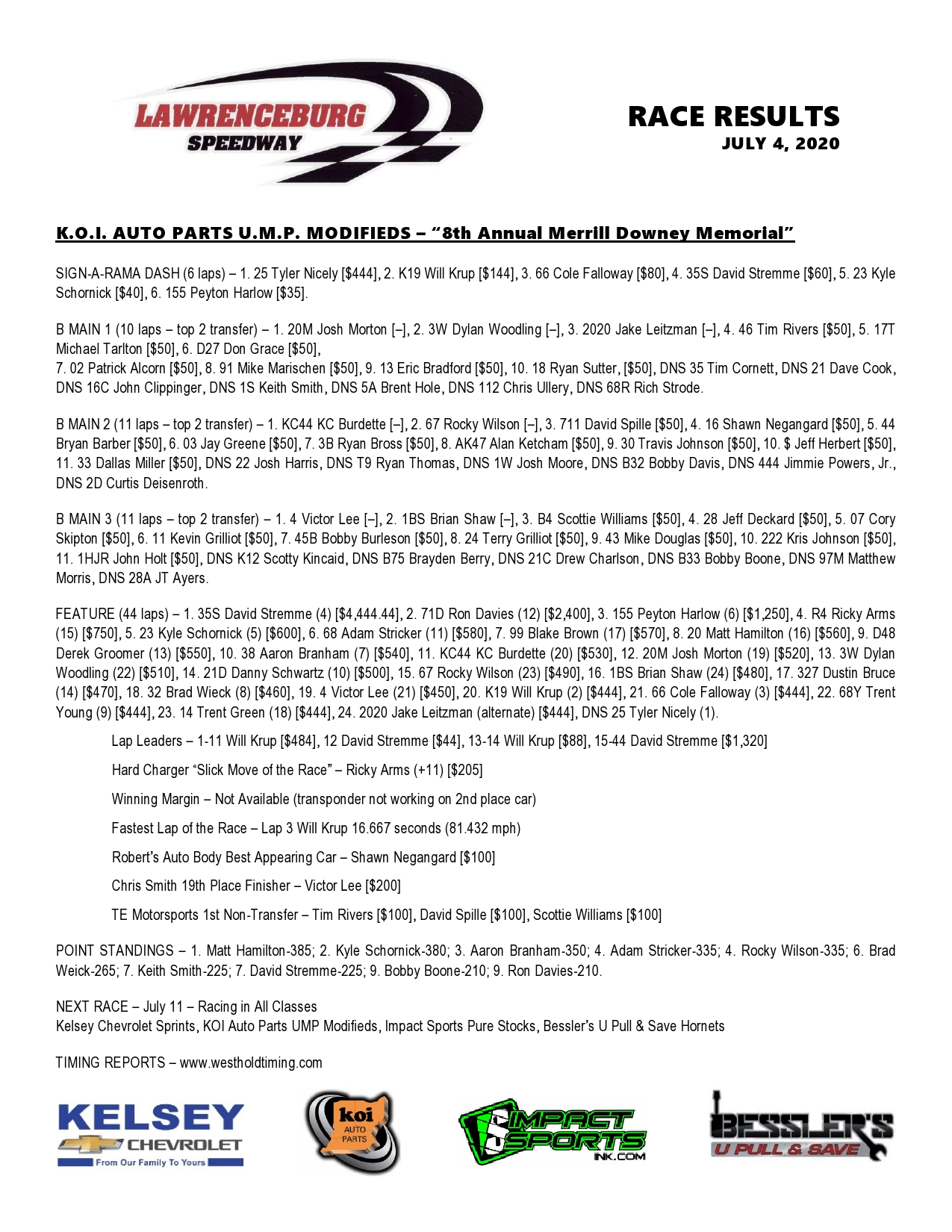 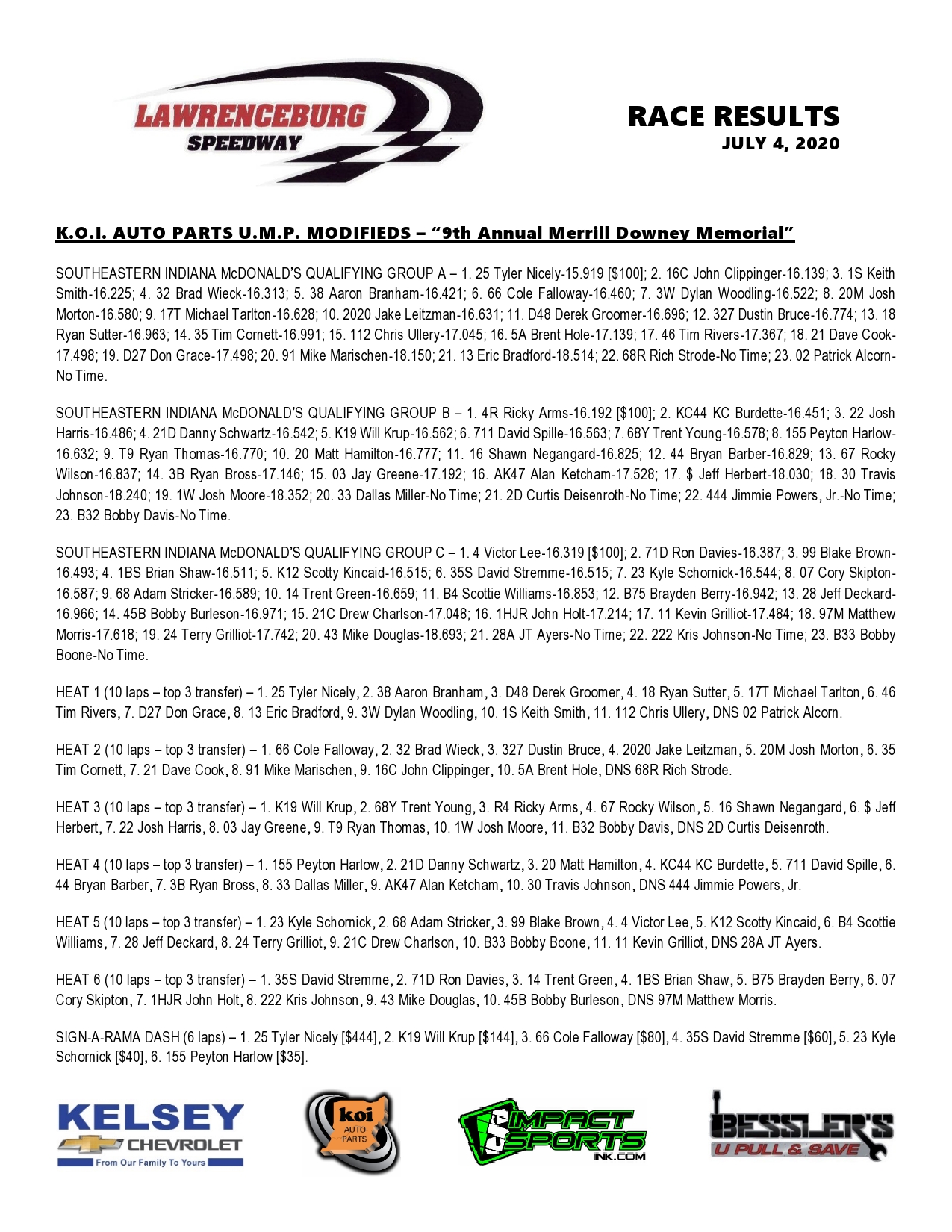