Indianapolis, native, Nick Bilbee enters the 2020 season a one of the top drivers at Lawrenceburg in the Kelsey Chevrolet Sprint Car class.  Bilbee would start the 25-lap feature from the 6th position and would move through the field quickly.  Up front Matt Westfall and Brady Bacon would start on the front row.  Bacon would jump to the top spot in the Hoffman 69 sprint car and set the pace for much of the race.  As the leaders encountered lapped traffic that allowed the cars running behind Bacon to close in on the race leader.  Bacon was still not having much trouble passing the slower cars but BIlbee had worked his way to the tail tank of Bacon’s 69 sprint car and waited for the opportunity to make a move.  That move came on lap 20 where Bilbee shot to the inside of Bacon down the backstretch and took the lead into turn 3.  Bacon may have been caught off guard a bit but quickly tried to regroup to retake the lead.  Bilbee and Bacon raced hard for the last 5 laps with Bilbee holding off Bacon for feature win.  It was Bilbee’s first of the year at Lawrenceburg and 7th overall win at Lawrenceburg.  Bacon was second followed by Matt Westfall, Dickie Gaines, and JJ Hughes.  Heat race winners were Bacon and Westfall.  The Kelsey Chevrolet Sprint Cars return to the track on Saturday, July 11th.

Hamilton Does it Again!

The 2019 KOI Auto Parts UMP Modified track champion, Matt Hamilton picked up right where he left off last year by winning the 20 lap Modified feature.  Rocky Wilson would lead and it would appear that Hamilton might not have enough to get around Wilson.  Wilson, not a regular at Lawrenceburg was racing to prepare for The Merrill Downey Memorial coming up next weekend.  Hamilton, now driving the Lightning chassis house car #20 waited for the right time and on lap 14, went underneath Wilson coming out of turn 4, taking the lead and pulling away on his way to his first feature win of the year at Lawrenceburg.  It was his 33rd career win at Lawrenceburg and places him second on the all times wins list across all classes.  Wilson finished second followed by Aaron Branham, Kyle Schornick, and Keith Smith.  Heat race winners were Schornick, Wilson, and Hamilton.  Adam Stricker won the B main.  The KOI Auto Parts UMP Modifieds return to the track next Saturday, July 4th for the annual Merrill Downey Memorial where the winner will take home $4,444.44.  David Stremme is the defending champion and is expected to be in attendance to defend his title.

2-time Besslers U Pull N Save Hornet champion Cordell Moore dominated the 12-lap feature for the Hornets first race of the season at Lawrenceburg.  Moore started on the pole and had no trouble picking up his first win of the year and his 13th career win at Lawrenceburg.  Michelle Baird ran a strong second followed by Bobby Smith, Tyler McGhee and Mark Gegner.  Heat race winners were Dalton Smith, Cordell Moore, and Bobby Smith.  Ryan Paciocco won the B main.  The Besslers U Pull N Save Hornets return to the track on Saturday July 11th.

Defending Impact Sports Purestocks Track Champion, Joel Andrews was involved in a crash during the heat race that completely broke the right front eliminating him from the heat race.  Andrews was able to make repairs and start near the back of the Purestock feature.  Most would have thought he would have struggled somewhat moving his way to the front, but Andrews did what Andrews does and that is get to the front and win.  James Ackman led the first 5 laps of the 15-lap feature before Andrews went around him on the outside on lap 6.  Andrews would dominate the rest of feature picking up his first feature win of the year and his 7th overall at Lawrenceburg.  The rest of the top 5 was James Ackman, Wayne Williams, Will McRoberts, and Will Hayes.  Heat race winners were James Ackman and William Dirr.  The Impact Sports Purestocks return to the track on on Saturday July 11th. 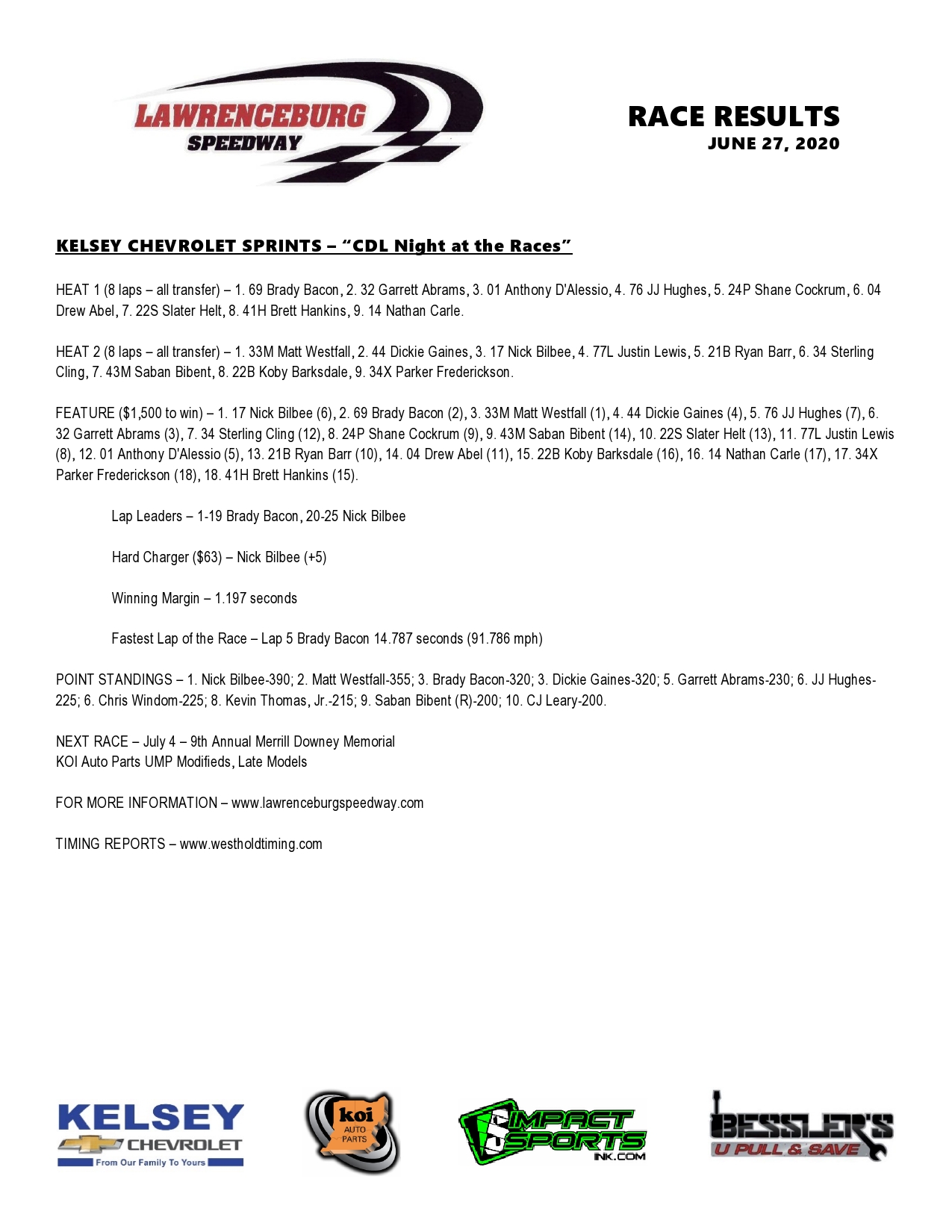 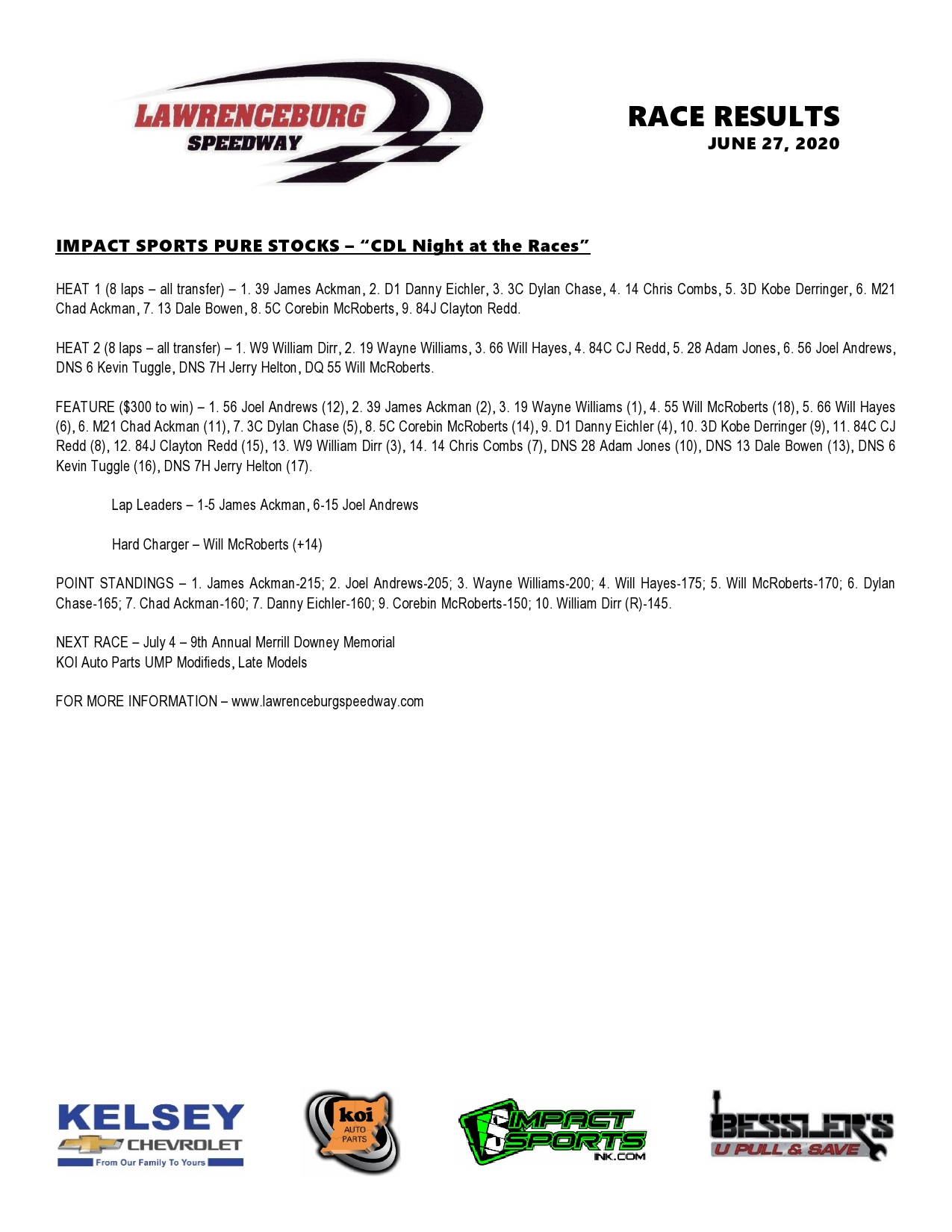 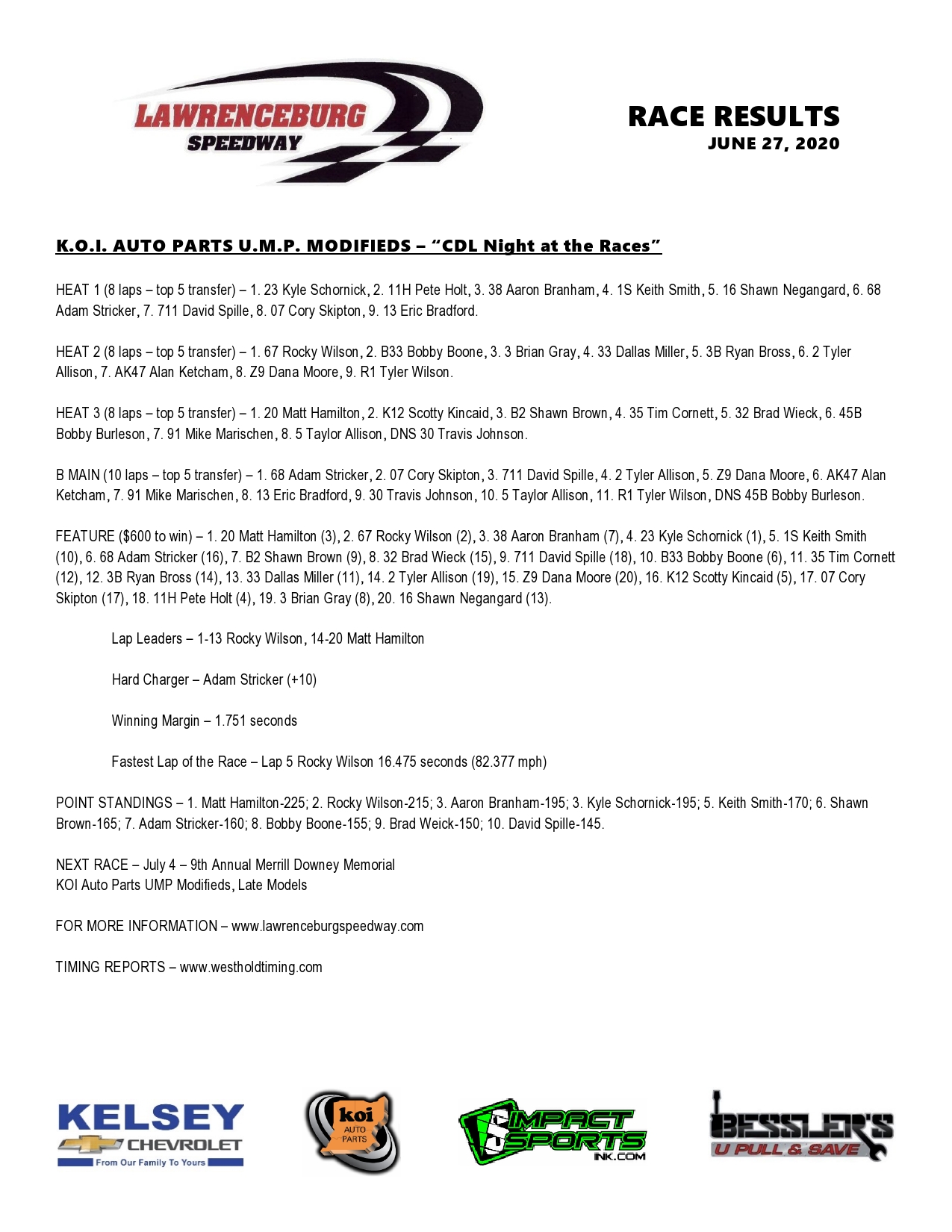 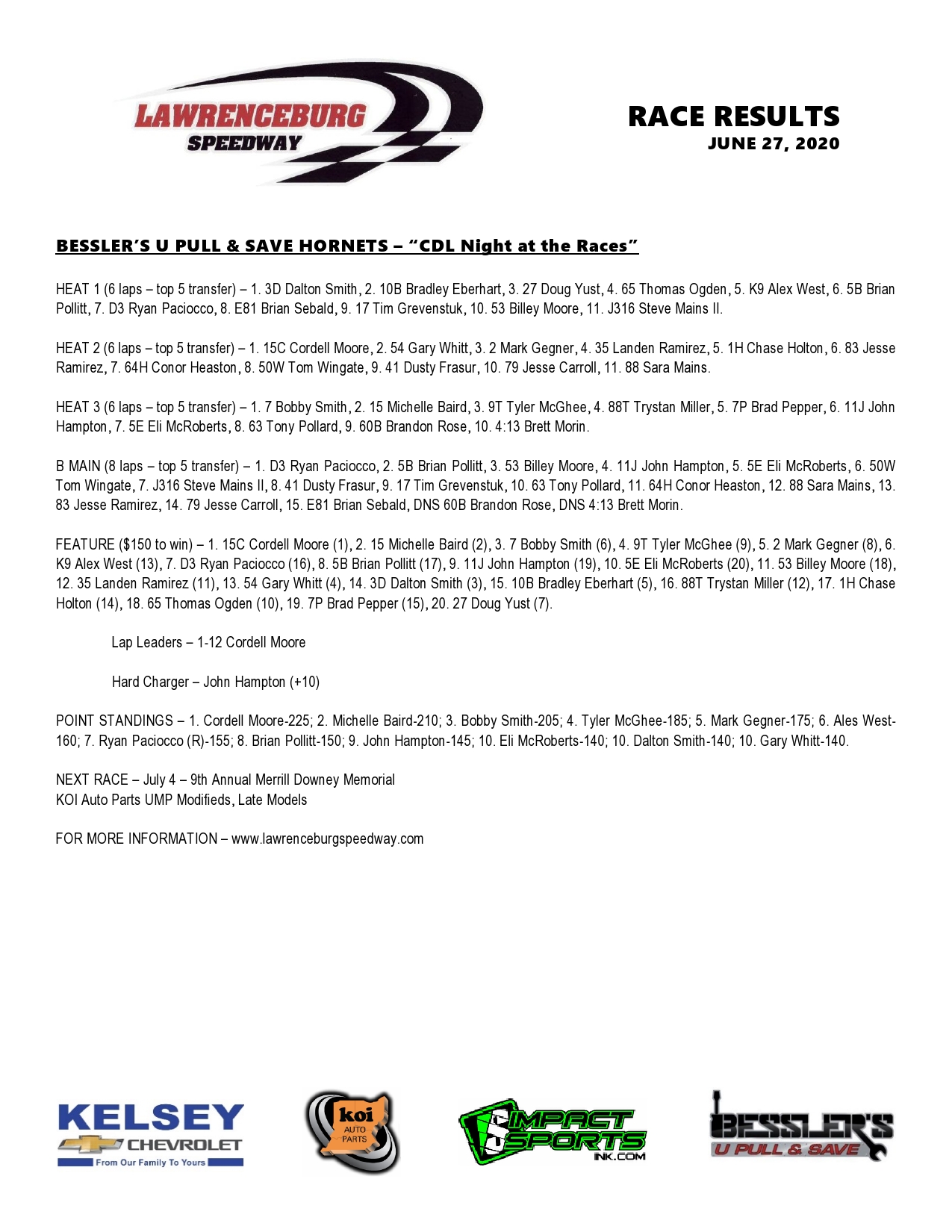